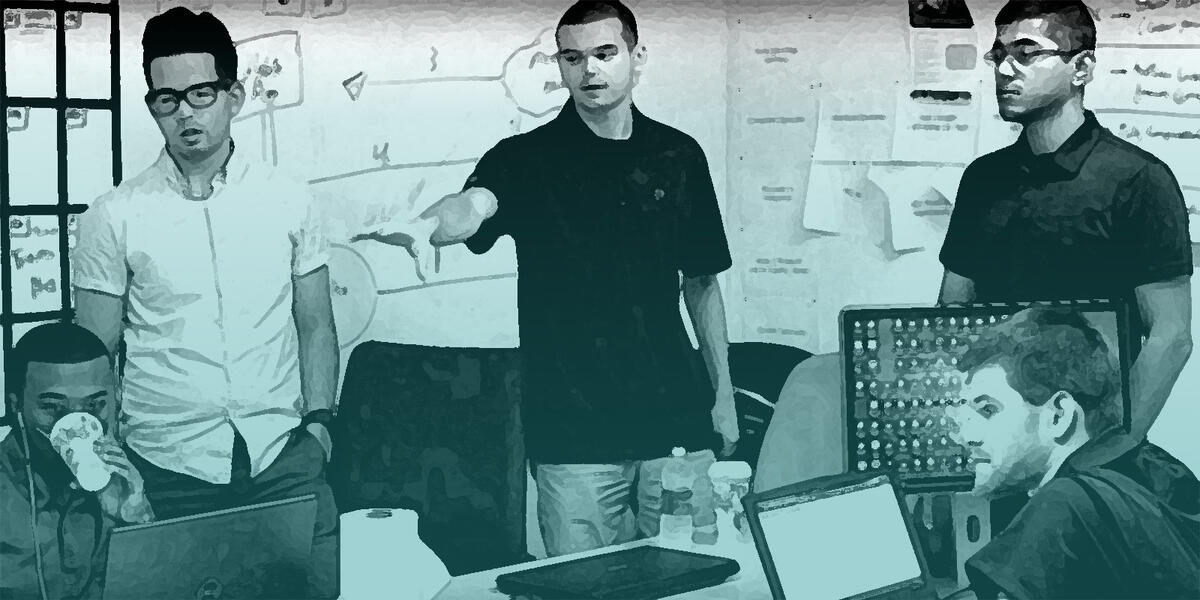 During a construction project, what keeps you up at night?

For one weekend last month a team made up of Pepper Construction, F3 & Associates and Caterpillar sought to make a dent in the “all of the above” response when they participated in this year’s AEC (Architect Engineer Contractor) Hackathon, hosted by BuiltWorlds.

What the heck is a Hackathon?

It’s basically a multi-day collaboration camp, where developers, designers and programmers come together to solve technology challenges. It’s based on transparency and an open source community. The process looks like this:

To learn about the history of the hackathon, self-prescribed Hacker Historian Jon Gottfried, Twilio, has presented at multiple events, including Hackcon and SXSW. He created a video and a SlideShare presentation.

A hackathon is an unexpected event for an industry perceived to be behind in technology, but we have some innovative tech minds. Meet our team:

Tom – The virtual reality/augmented reality (VR/AR) guru, in charge of figuring out how to pull the information together into a visual app.

Eveart – Virtual construction engineer for Pepper. He was the originator of the idea, by thinking about “what’s next” with the technology he uses every day.

John – Programmer and analyst, charged with the marketability and profitability of the product – essentially putting it in a file format that can be used.

Prior to the event, the team brainstormed ideas to hack. Eveart thought about his work with laser scan registrations on concrete jobs – and the multiple times the same location is scanned to ensure accuracy: evaluating Ff and Fl, as-builts, pre-pour, post-pour and then another post-pour scan.

He began to ask himself the following questions:

Once the Pepper team pitched this idea to the room, two other industry peers chose to join the team and sign up under the name: Peter Piper Picked a Peck of Pickled Peppers. Sanat and Santiago helped carry the project over the finish line through additional research and programming – but not before working through a major bump in the road.

Moving to Plan B

The concept required the team to overcome two technology challenges that exist in construction today:

01. The large file sizes of the BIM model and scans prevent someone from pulling up the plans in the field from a mobile device.

02. When referencing documents on a small screen, it’s hard to pinpoint the information needed, particularly in the form of an entire set of drawings or a model.

Because of this, those looking from the outside-in said it was impossible. The idea was too big to accomplish in one weekend.

“While we originally hoped to solve the challenges with a GPS solution, the reality is that current technology and time limits of the hackathon meant we had to find an alternative solution.” - Tom

With ten hours to go, they still didn’t know how to get scanned data into the model. So instead, the team used QR codes to solve both challenges – informing the app where the person is standing and downloading the information in more manageable, bite-size chunks.

Were they able to pull it off? Heck yeah. After 40 hours in one weekend, the team was able to generate a model or mesh, at least to the point of demonstrating it.

The team has remained in communication and continues to refine the app, with additional input from Caterpillar and other project management and field staff at Pepper.

“It reminded me of being back in school again. Pulling all-nighters – like finals week... We may not get the code itself from every hack, but the value of the event is the ideas and the community – learning what issues others run into.” - John

The environment itself was relaxed. Each team had their own room and also the flexibility to get up and help out other teams. That’s because the goal was to bring together a bunch of programming minds to produce useable solutions for the industry.

When asked if they would do it again, all agreed that it was worth it.

Appropriately nicknamed the Superman app, the solution is designed for workers in the field to look at a wall, hold up a mobile device and pull up the plans and scans of the systems that are located inside the wall - based on where they are standing. And it took a superhero effort to get it done.

“It let me know that anything is possible. As long as you can imagine it; it can be created.” -  Eveart

Refer to our virtual design and construction services to learn more information about laser scanning, or we invite you to contact us with questions.

The role of technology in construction – facilitating connections