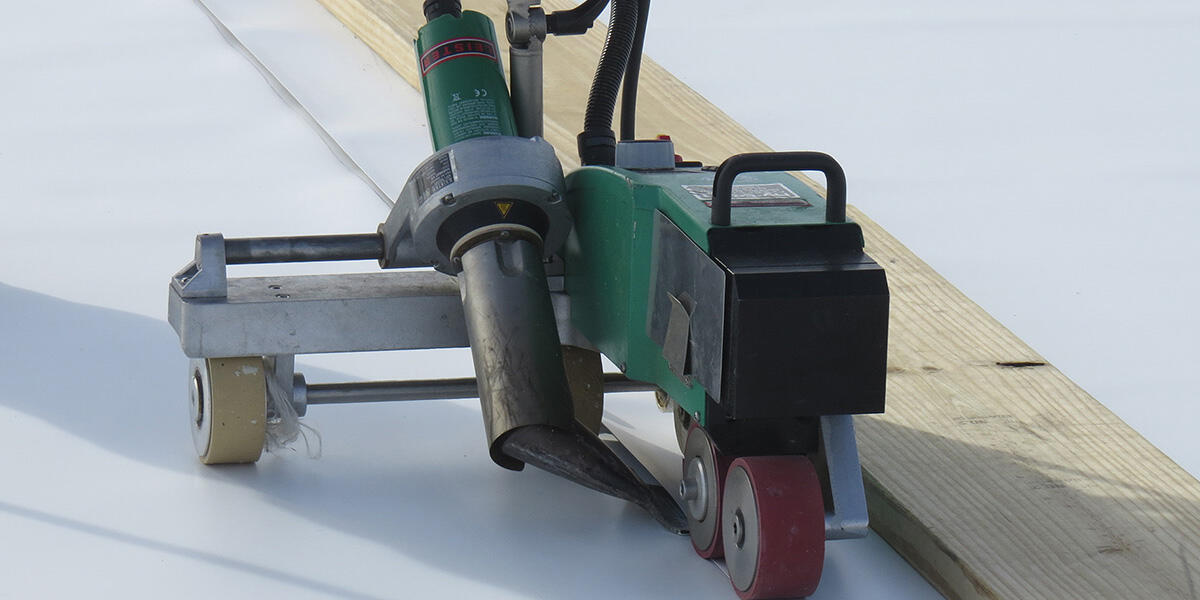 Peeling back the layers of TPO roofing systems

Everyone agrees the roof is important – after all, no one wants a leaky roof – but not everyone understands the options when selecting a roof system. If all of them come with a warranty, why not choose the cheapest option?

According to the 2014-2015 National Roofing Contractors Association (NRCA) Market Study, most new projects in the past few years have specified a white TPO roof. In general, TPO is a relatively low-cost, high performing roof membrane – when installed the right way.

Starting with the roof membrane, we will work down through the system and discuss the pros and cons of these decisions and how they work together. This information will help you make the right TPO roof selection for your next project and tell you where to look for any performance failures with your existing roof. 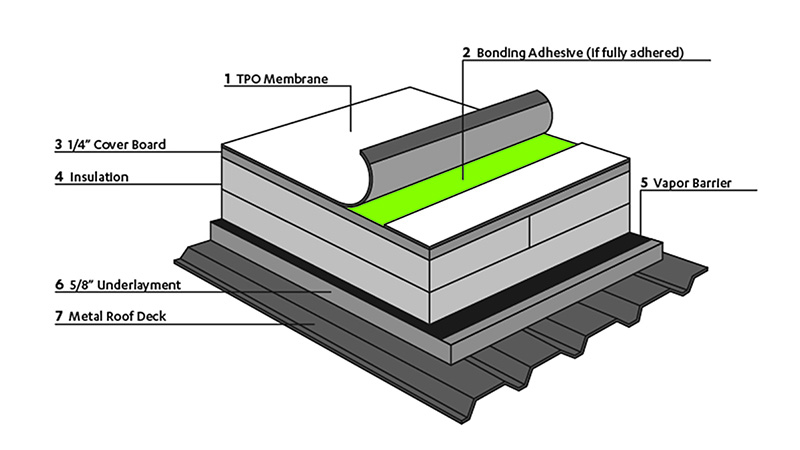 First, a little bit about the membrane. TPO stands for Thermoplastic Polyolefin. Thermoplastic means that it becomes plastic upon heating and hardens upon cooling, and this is how it seals at the seams. A hot air welder is used to heat the membrane above and below, turning it to plastic and making it moldable. While it is still plastic, a roller is used to fuse the top and bottom membranes together, forming the watertight seam, typically 1 ½" wide if done by robot or 2" wide if done by hand. No matter which option is chosen below the membrane, this is how all TPO roofs are sealed at the seams.

TPO is typically sold in thicknesses of 45 mil, 60 mil and 90 mil. In Indiana, we typically see 45 mil and 60 mil specified. The thicker the membrane, the better the long term durability. For example, if the owner expects workers to routinely service rooftop mechanical units, a thicker roof membrane should be considered.

There are two primary options for attaching the TPO membrane: mechanically attached and fully adhered.

Mechanically attached membranes are fastened through the insulation boards down to the structural deck at 12" on center (OC) in every seam on the roof.  The seam is then welded outside of these fasteners.

The downside is that mechanically attached roofs are ONLY attached in the seams – so between the seams, the membrane is loose. Strong winds or positive building pressure can cause the membrane to billow up (think of the old RCA Dome in Indianapolis). The billowing creates pockets of air above the insulation, which can pump the conditioned building air into this space. 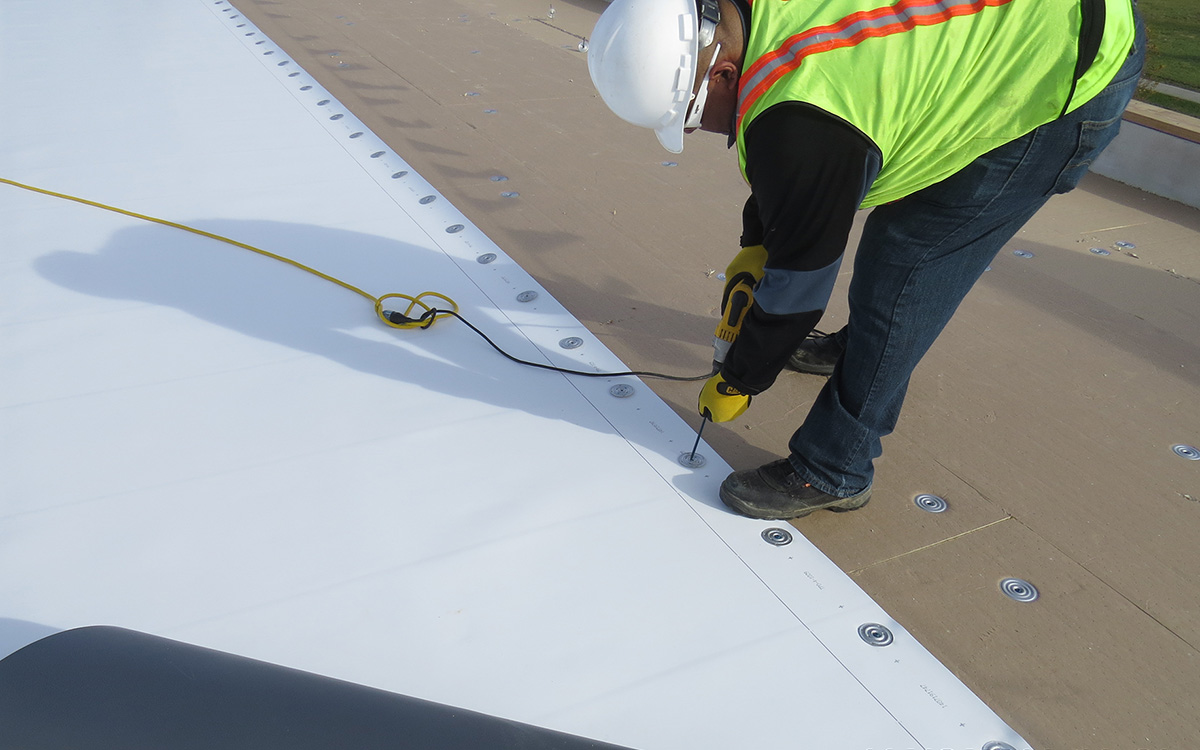 In the winter, this warm conditioned air cools and can condense on the underside of the cold membrane. Over time, this can wet the insulation which reduces the R-value and can lead to mold. Since the membranes are typically white, they do not gain enough heat to warm the top layer of insulation and drive the moisture back down into the building. (For more information, see the Oak Ridge National Laboratory 2013 study: Condensation Risk of Mechanically Attached Roof Systems in Cold Climate Zones).

Beyond that, the billowing action is not energy efficient because the building loses conditioned air above the roof membrane. For states that have adopted the 2012, or later, International Energy Conservation Code (IECC) an air barrier is required on the roof and walls. (Indiana still adheres to the 2009 IECC.)  The billowing roof membrane can also create a sound issue for the owner as it flaps up and down.

Because of the billowing effect, a mechanically attached roof membrane does not count as an air barrier; a separate air barrier would need to be installed below the membrane (likely below the insulation layer as well).

Lastly, mechanically attached roof membranes put significantly more stress on the building structure since they are only attached at the seams. According to the Steel Deck Institute (SDI) position statement, Attachment of Roof Membranes to Steel Deck, "Under uplift conditions, the attachment of the roofing membrane along lines with large spacing could produce localized loads that can exceed the capacity of the deck, whereas those same loads applied uniformly on the surface of the deck would be acceptable."  SDI recommends that membrane seams should always run perpendicular to the flutes, since the loads are much more significant if run parallel to the flutes.

For mechanically attached systems, the structural engineer should always verify that the structure can accommodate increased loads.

Typically, mechanically attached roof systems are selected because of the lower cost or when the project needs the roof to be installed in low temperatures, understanding the requirements to keep the membrane warm prior to installation.

The system is fully bonded to the substrate, which eliminates issues with billowing, makes it less prone to condensation under the membrane and makes it more energy efficient.

Other than cost, the primary disadvantage of the fully adhered system is the temperature limitation on the adhesives (typically 40°F and rising), which limits when these systems can be installed during the winter.

Given the performance advantages of a fully adhered system, it is the preferred option for most commercial construction projects.

A cover board is typically a ¼" gypsum board that is installed directly under the membrane. Cover boards provide a more solid backing than the insulation boards alone, which improves the puncture resistance and long-term durability of the roof. Cover boards are strongly recommended on roofs where regular foot traffic or maintenance work will occur.

TPO roof insulation in the Midwest is typically polyisocyanurate board insulation, also referred to as polyiso or just iso. Insulation thickness must meet the energy code, which is verified during the Building Envelope COMCHECK.

Most roof membrane manufacturers also manufacture their own insulation and typically require their brand be used to keep the warranty. Insulation over 2" thick needs to be installed in two layers, with staggered board joints per the roofing manufacturer's instructions. Staggering the board joints is more energy efficient since it does not allow a continuous break in the insulation layer.

A fully adhered roof system usually just refers to the membrane so if an owner doesn't want exposed fasteners on the underside of the roof deck, fully adhered insulation should be specified as well.

There are three options for attaching the insulation: mechanically attached with plates and fasteners, adhered with ribbons of foam adhesive or a combination of fasteners and adhesives.

When adhered, the insulation layers are glued down using ribbons of foam adhesive. Since metal fasteners act as thermal bridges, and adhered insulation doesn't use fasteners, this process is more energy efficient. However, adhered systems need a solid substrate below. A structural metal deck is fluted (and therefore not continuous), so a mechanically attached underlayment, such as a 5/8" gypsum base layer, is required.

When a concrete deck has been poured under the roof, the concrete has not likely dried enough to be a confident substrate for good adhesion (A vapor barrier is recommended over any concrete roof deck). In this case, a combination attachment system of fasteners and adhesive should be considered. The base layer of insulation can be mechanically attached into the concrete, and the subsequent layers of insulation can then be adhered to the base layer with foam adhesive. This reduces the thermal bridging of the fasteners while still providing the confident attachment of the fasteners into the relatively green concrete.

On projects where energy efficiency is highly important, adhering the insulation is the best option for reducing the thermal bridging introduced by fasteners. Otherwise, mechanically attached insulation is a good installation method for most projects.

Basic science tells us that vapor moves from hot to cold and high pressure to low pressure, and the bigger the difference in temperature and pressure, the greater the vapor drive. Colder climates have a much larger difference in temperature from inside to outside. This thereby creates a condition where the vapor inside wants to get out, but it has to go through the roof first.

Whether loose laid or fully adhered, projects in the Midwest should always consider a vapor barrier in the roof system as a first option to protect the roof insulation over the long term.  Vapor barriers should only be omitted from projects as a recommendation by the design team after careful consideration for the climate zone and building use.

Sometimes an underlayment is needed under the insulation layer. The underlayment is normally a 5/8" gypsum board and is typically installed when an improved fire resistive rating is required or to create a solid substrate on top of a fluted metal deck. To provide a solid substrate, the gypsum board is mechanically fastened to the deck. Then, the vapor barrier, insulation and membrane layers can then be fully adhered without the need for any other fasteners.

Owners are increasingly interested not just in first costs but in the systems that will perform the best over the long term. When you break down each layer, you can see that more goes into a TPO roof than you might expect. While all roof systems should keep a building dry, not all of them will perform equally over the long term. If you have questions about which system is right for your project or if you have another question we can answer, contact us. We can help.

Ben Dykstra is director of quality management for Pepper Construction in Indiana. He started his career in project management before transitioning to quality management in 2012, where his passion and commitment to quality extends beyond the planning and execution of the work to the overall functionality and performance of a building throughout its life cycle.

Ben holds a Bachelor of Arts in Engineering from Wheaton College and a Bachelor of Science in Civil Engineering from Illinois Institute of Technology.  He is a Registered Roof Observer (RRO), Registered Exterior Wall Observer (REWO), a Certified Level 1 Thermographer, and Army Corp. of Engineers Construction Quality Management (CQM) certified.  Ben also is a member of RCI, Inc. and is a Major in the Indiana Army National Guard.

Illuminating the impact of LED lighting