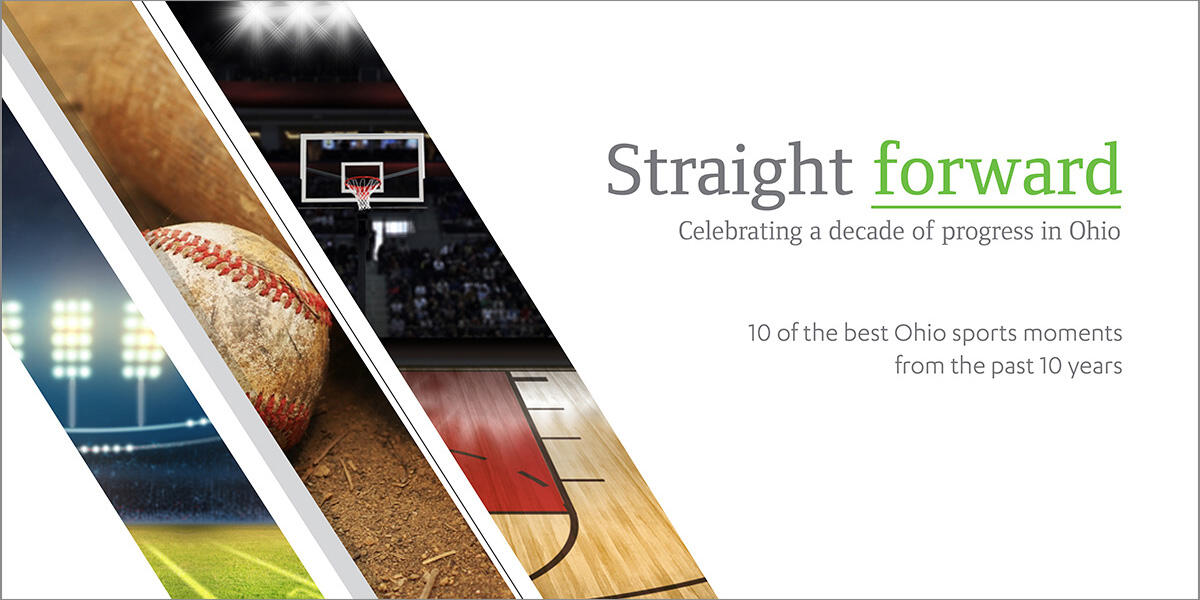 Ohio is home to a range of sporting teams and venues, including the Pro Football Hall of Fame, the first professionally organized baseball team (Reds) and the Memorial Golf Tournament, which is held in our own backyard of Dublin. We're avid fans, so it only makes sense that the celebration of our first 10 years includes a list of our top 10 Ohio sports moments from the past decade.

What better Ohio sports moment than the Cleveland Cavaliers winning the 2016 NBA Championship against the favored Golden State Warriors. The team made history by becoming the first NBA Championship team in franchise history, and the first team in NBA history, to come back from a 3-1 deficit to win the Finals!

Led by quarterback Cardale Jones and running back Ezekiel Elliot, the Buckeyes rolled past the Oregon Ducks in the inaugural College Football Playoff National Championship game with a score of 42-20. Despite losing two quarterbacks during the regular season, the Buckeyes were able to accomplish the impossible with their third string quarterback leading them to a tremendous victory. O-H!

Although the Indians did not come away with the game 7 victory, the team still had a monumental season making it to the World Series for the first time in nearly 20 years. The team marked impressive results with 94 regular season wins as well as victories over the Red Sox and Blue Jays on their way to the World Series.

Jay Bruce secured this moment in Red’s history on September 28, 2010 by hitting a walk-off home run at the Great American Ball Park and sending the Reds to their first playoff game in 15 years. The Reds beat the Milwaukee Brewers 3-2 and finished the season with a total of 91 wins.

There is no better college sports rivalry than the Ohio State Buckeyes vs. That Team Up North. The 2006 matchup was more intense than ever with the Buckeyes ranked #1 and Michigan ranked #2 in the polls. Ohio State walked away with a very tight 42-39 win over Michigan.

In 2008, the Columbus CREW won their first ever MLS Cup Championship with a record of (17-7-6). The CREW was also the first MLS team in 6 seasons to win the Supporter’s Shield – MLS Cup Double and qualified for the CONCACAF Champions league.

07. Dayton Flyers Make it to the Elite 8

The Dayton Flyers shocked the nation when they beat out No. 6 Ohio State and No. 3 Syracuse to make it to the 2014 NCAA Basketball Elite 8. It was reported that the surprise run brought in over $70 million for the city of Dayton.

The first Pelotonia, a 3-day cycling event, was started in Columbus, Ohio, in 2008. Over the course of the past 8 years, riders have raised more than $120 million for cancer research at the James Cancer Hospital and Solove Research Institute.

All eyes were on Dublin, Ohio, when the city hosted the 2013 President’s Cup at the Muirfield Village Golf Club. The selection was made in part as a tribute to the golfing icon, Jack Nicklaus, who designed the course. The United States team walked away with the win.

10 more places to see in Columbus and Cincinnati

10 trends that are changing the workplace environment [2017]