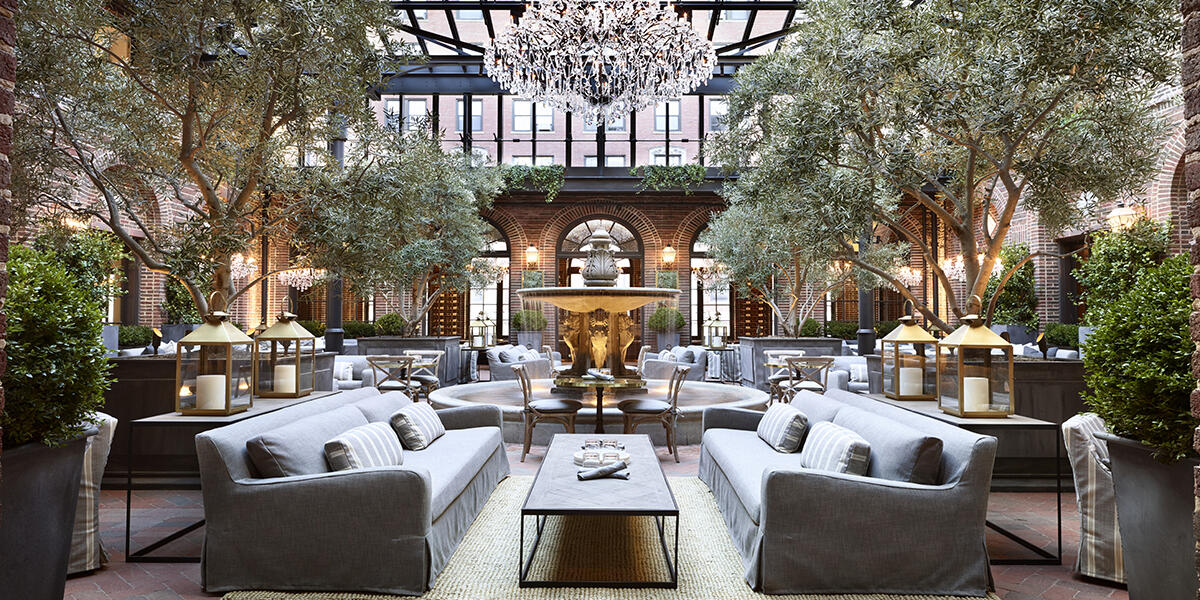 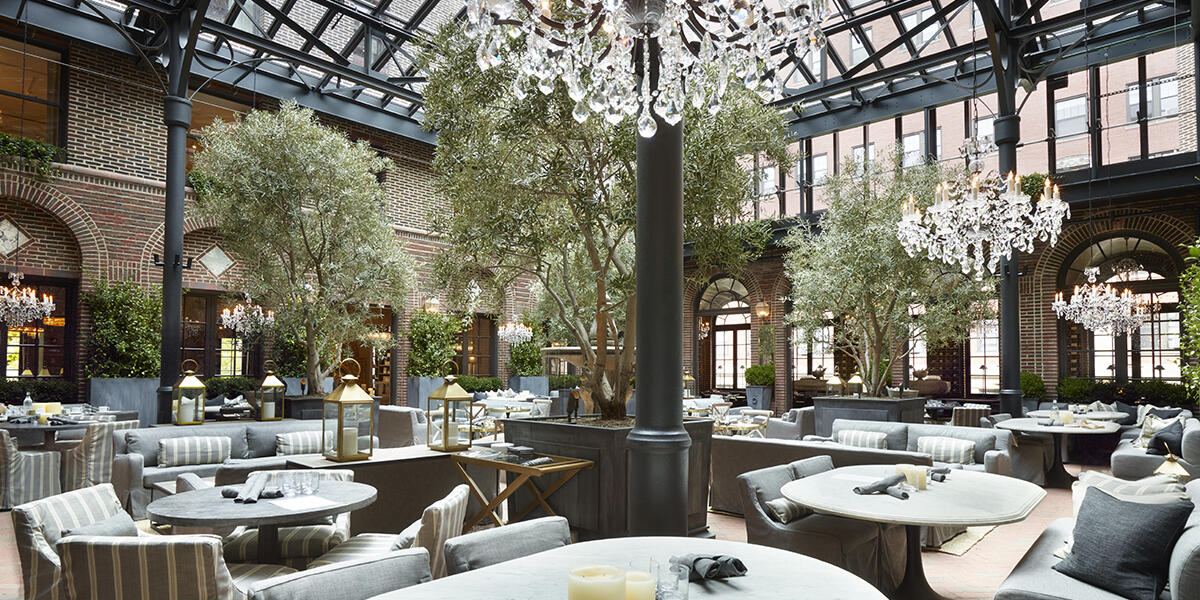 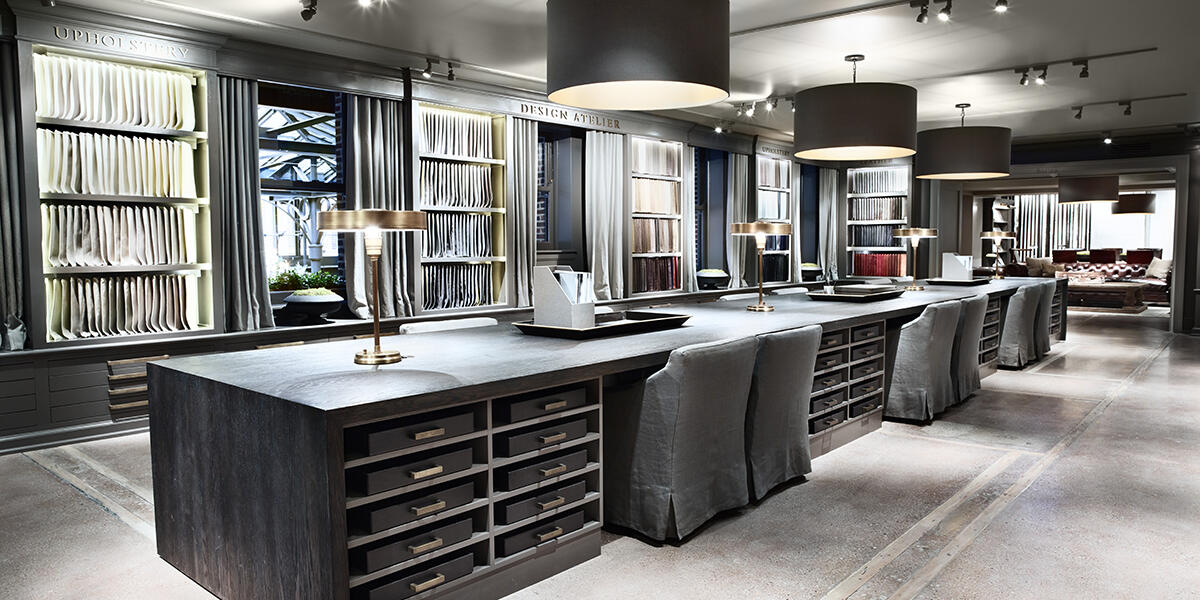 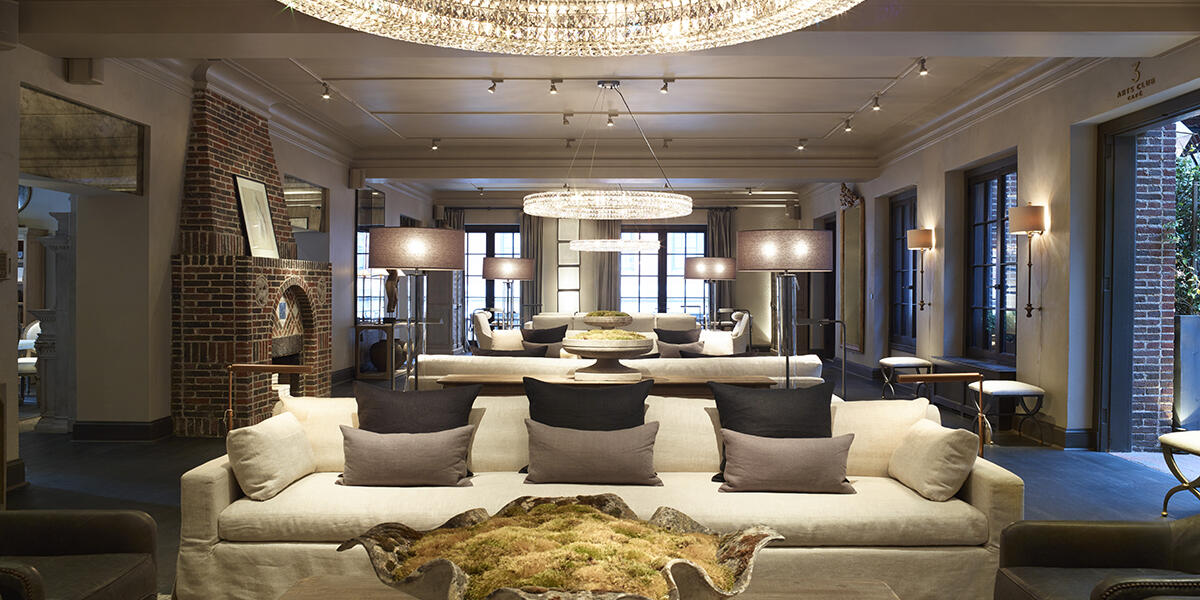 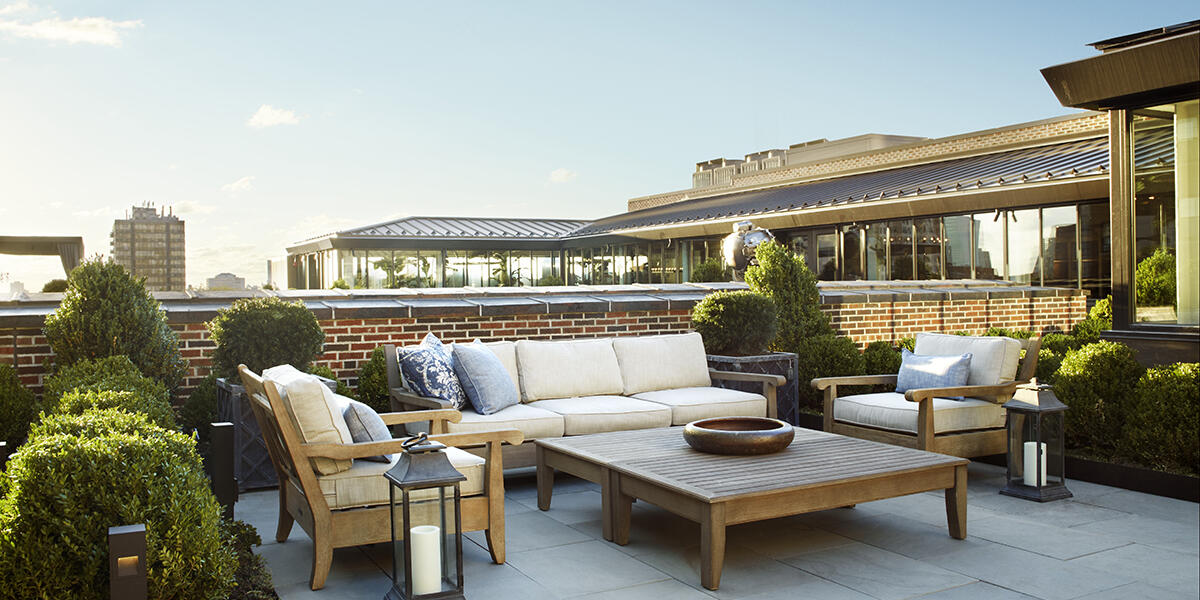 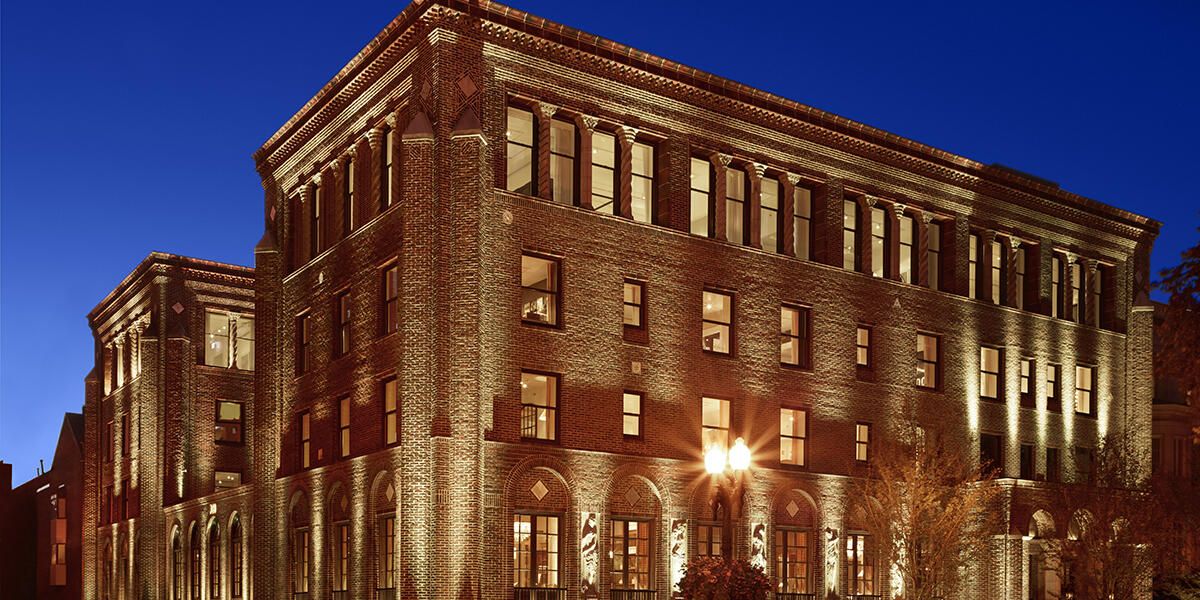 The historic Three Arts Club has re-emerged as the Restoration Hardware (RH) flagship Chicago Gallery after being vacant and neglected since 2004. The 1914 Holabird and Roche building, both a City of Chicago Landmark and listed on the National Register of Historic Places, once served as a home and club for women of the three arts – music, painting and drama. Through a complex and precise historic renovation that respects the history of the Club, as well as the thoughtful addition of new spaces, the Three Arts Club has once again introduced a new pattern into Chicago’s urban fabric.

Shopping – and a historic space – reimagined 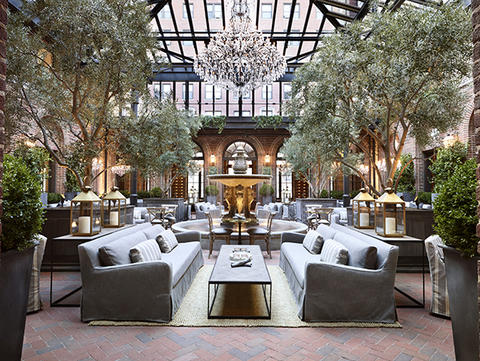 RH’s gallery concept is something brand new to the retail world, with new spaces designed to blur the lines between shopping, home and hospitality. The major focus of the design was the precise restoration of historically significant interior and exterior details. In addition, two new spaces on the first floor and rooftop take on an industrial aesthetic intended to synthesize contemporary and historic architecture.

At the first floor, a new two-story atrium transforms the center courtyard into a public dining area. The metal skylight and openings into the first and second floor galleries create a naturally-lit environment full of sights and sounds that delight. The atrium allows an immersive dining experience inspired by the famed Hotel Costes in Paris. Early in the process, direction came from The Chicago Landmarks Commission that the atrium space should not be visible from critical views along the street. The design team responded with a four-sided pyramidal skylight that extends to the second level, bringing both natural light and views of the historic facade into the café.

The Gallery’s Gold Coast site is in a quiet, largely residential area with both single- and multi-unit buildings. Through outreach and coordination, the team was able to establish an agreement with the community with protocols for exterior lighting levels, noise and standard hours of operation or activity. A contract for off-site valet parking was included so that traffic patterns were not significantly altered. These measures ensured that the residential character of the neighborhood was preserved. By allowing the community to be engaged in the project from the outset, the team developed a streamlined construction process.

Extensive effort was made to restore features of the original Three Arts Club. As the design developed the team frequently sought the counsel of Chicago Landmarks officers to identify historical elements and review correct procedures for restoration. These determinations were presented to RH for final approval. On the façade, all exterior masonry and terra cotta was investigated and areas of remedial work were identified and restored. Old fire escapes, once required when the building was residential, were removed from the south façade.

In the interior of the building much of the restoration work occurred at the first floor. The team tested 3,000 square feet of painted murals on the walls and ceilings of the historic dining room for original color. The original ornamental banding at the top of walls was recreated using innovative canvas reproductions, an approach that satisfied The Landmarks Commission as well as shortened the duration of restoration process. All of the original wood doors and windows on the first floor were also restored to preserve historic design profiles while also including new thermal glass. Windows on upper floors were replaced with new historic profile windows to match. Historical paint analysis ensured that the new trim colors would be appropriate for the historic aesthetic of building. 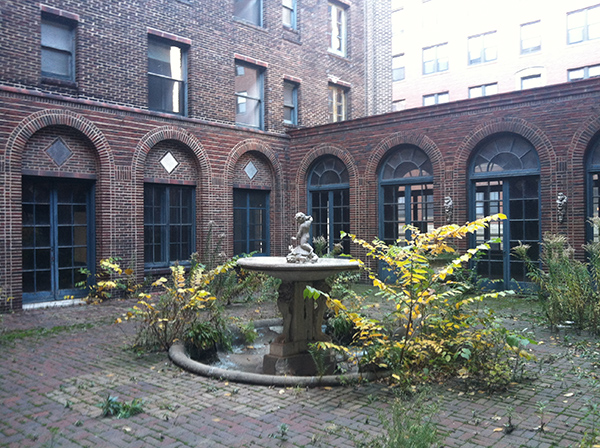 The original exterior courtyard fountain, built in 1914, had suffered severe damage due to exposure to the elements. Attempting to move it would result in its collapse and restoring it where it stood was not possible. Pepper and our subcontractor were able to three-dimensionally scan the fountain in-place, remove it and painstakingly recreate it using both the scan and salvaged pieces as reference. The recreated fountain satisfied both RH and Landmarks Chicago. It now sits in the new atrium as a focal point of the café.

Restoration requirements impacted even the selection of the building systems. A Variable Refrigerant Flow System (VRF) was selected not only to heat and cool the space with more precise temperature control and lower energy consumption, but was also designed to have minimal impact to the existing architecture. The first floor space is entirely fed from the floor, while floors above have small duct runs tucked along corridor walls. By selecting the VRF system both initial costs and operational costs were reduced.

During construction, RH’s development team realized that the existing basement was not large enough to accommodate the gallery storage rooms, office space, toilet rooms, and mechanical equipment. It became clear that the best solution would be to excavate below the original courtyard to enlarge the basement level. Pepper addressed this late change by securing an excavator agile enough to fit in the 45’ by 45’ courtyard. The excavator was crane-lifted it into place to avoid touching the building, and soil was removed on a conveyor system through the building and loaded onto trucks. Fortunately the soil was found to be uncontaminated and the foundation walls adequate to remain without additional support. Within three weeks, RH had enough space for a functional basement.

The new Gallery breathes life into a monumental landmark that was closed to the public for far too long. The restoration pays tribute to the original private artist-residents while repurposing the building as a public destination within the neighborhood. The Gold Coast gained a local café featuring the cuisine of famed Chicago restaurateur Brendan Sodikoff. This café is an immersive dining experience where neighbors and visitors alike can sample food, drink and merchandise all in one building.

RH Chairman and Chief Executive Gary Friedman stated in the Chicago Tribune that RH Chicago is the company’s most successful Gallery to open to-date and that it is on track to exceed expectations, all while staying true to RH’s appreciation of classic design. As retail environments are trending towards the experiential, the new Gallery ensures that RH’s vision and local presence are firmly rooted in Chicago. The space sets new precedents for urban retail by harmonizing contemporary and historic design with shopping and hospitality experiences.

A legacy of raising the bar