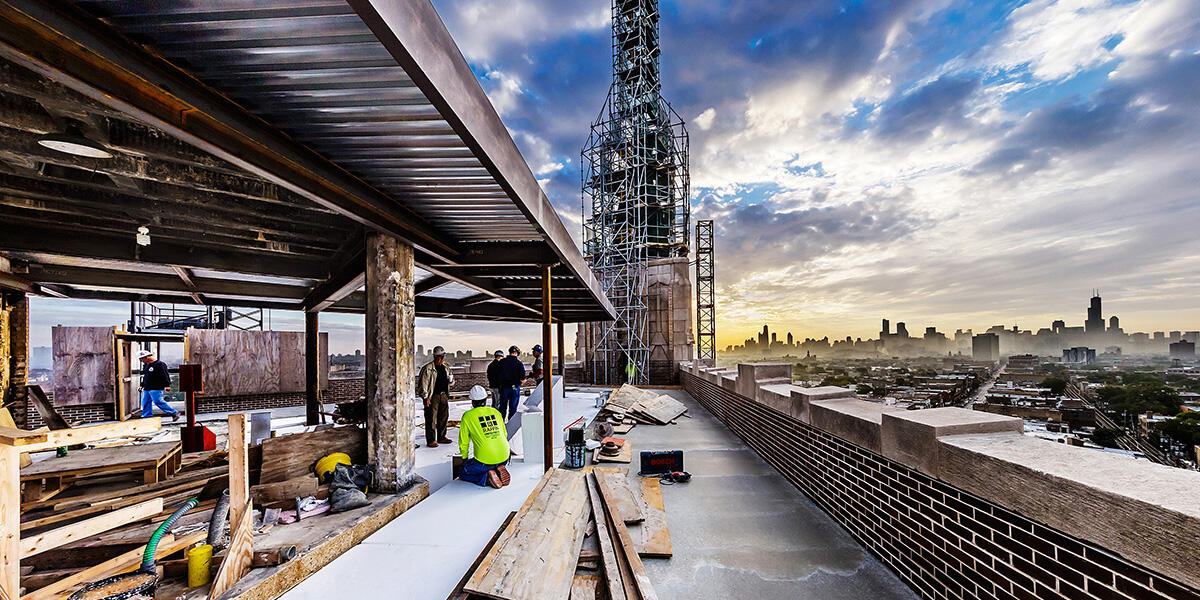 Chicago’s newest hotel and hostel, The Robey and The Hollander, are built on more than 110 years of local history. They have been featured in countless local and international publications since it opened last year. Most recently, The Robey was named to T+L’s It List, their annual collection of the best new hotels around the world. While they are impressive buildings, if you talk with the teams who worked on The Robey and The Hollander, you appreciate their significance even more.

Going from tear down to turn-down

When The Robey & The Hollander buildings were acquired in 2012 by DRW Real Estate Investments, they were in bad disrepair. The mostly vacant buildings had been neglected for the better part of 50 years. Scaffolding shrouded the structures to protect the public from bricks and mortar falling off the buildings. Windows were boarded up, parapets were collapsing in, concrete spandrels were crumbling and structural braces prevented bricks from shooting out into the streets. 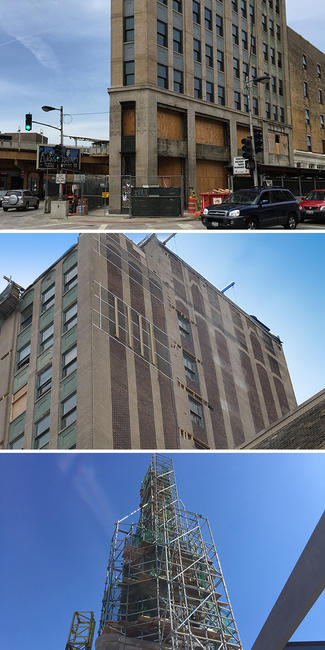 The Robey & The Hollander preside over one of the city’s busiest six-point intersections in the popular Wicker Park/Bucktown neighborhood. Built in 1929, the flat-iron shaped Northwest tower was the first high-rise outside of Chicago’s downtown area. It became The Robey. The Hollander’s home is the historic 1905 Hollander Fireproof Warehouse adjacent to The Robey.

Nothing about this project was typical, and the team faced one challenge after another. The stories shared here are but a few of the unique features, demonstrating the level of patience, perfection in the littlest details and commitment to looking for solutions, even when it seemed there were no options.

Complete restoration: from the outside-in

The owner’s vision was to restore the buildings to their original art deco era, re-use as much of the existing features as possible and layer modern touches inside. The condition of the buildings required some creative solutions and careful craftsmanship to meet the historic preservation requirements, bring them up to modern code and re-purpose the buildings for a new use.

The team spent the first year of the project working on the exterior – shoring up the structure and restoring the façade. Before beginning demolition, they determined what could be salvaged and re-used. In some cases, the materials were damaged beyond repair, and replicas had to be fabricated.

Attached to the back façade of the Northwest tower, large sections of steel beams and vertical bars, some 50 feet tall x 20 feet wide, were used to support the masonry while the building sat vacant. Many of the bricks throughout the façade were loose and cracked and needed to be replaced. On the Hollander, the bricks on the Milwaukee Street side became discolored over time, transitioning from yellow at the bottom to black at the top of the building.

Because of the historic designation, the new bricks had to match the same pattern of the existing. The team first cleaned small portions of the facade to determine the original color of the existing bricks and match the new masonry to the old. Options were then submitted for approval to the design team, and the final selection was submitted to the National Park Service for historic preservation approval.

For the Hollander, the design team preferred the aged aesthetic of the stained masonry so after cleaning the façade and matching and installing the new brick, the team stained the façade to replicate the weathered look. But not before proving to the national parks that the stain could be reversed and the bricks restored to their original color.

In total, seven different brick types, seven grout types and three options for limestone were matched including patching, repairing, and replacing, as well as restoration to terra cotta and architectural concrete spandrel panels. 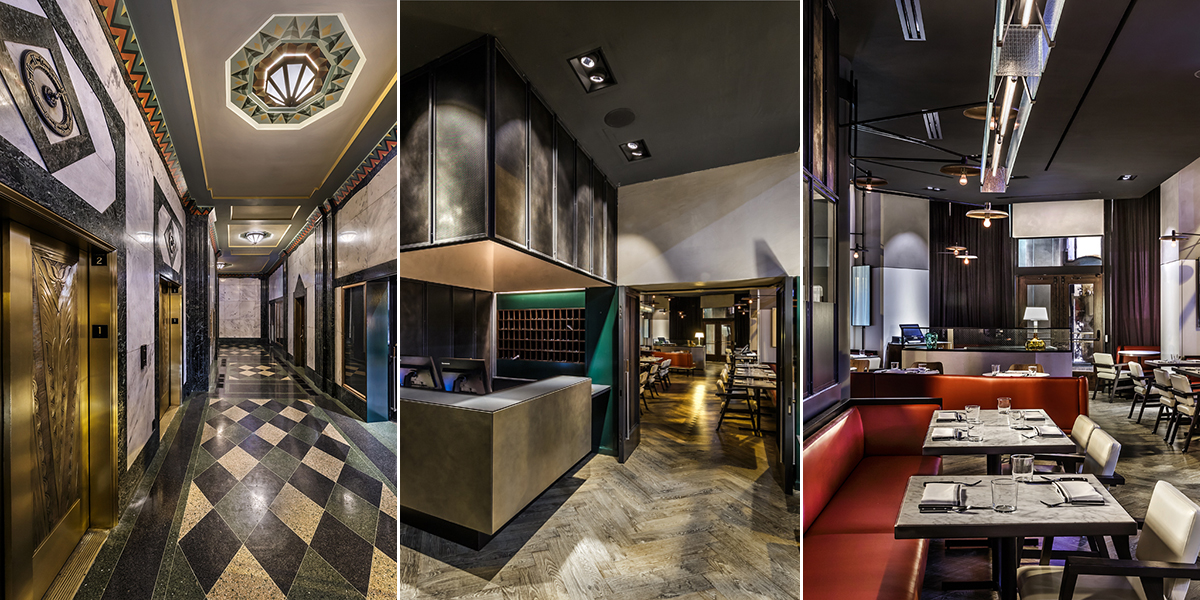 Inside, the goal was to keep the original details and materials whenever possible. Everything was removed back to the structure in both buildings and then carefully put back in place or re-purposed.

Total team collaboration: Checking out solutions so guests can check in

The team hired to design and manage the process was a diverse mix, selected for their expertise.

While Convexity and Antunovich Associates (architect of record) are based in Chicago, they contracted with Mexico City–based Grupo Habita to serve as the hotel operator, as well as two different design firms for The Robey and The Hollander. Nicolas Schuybroek Architects and Marc Merckx Interiors, both based in Belgium, brought a Vintage American style to the Robey, and French design studios Cigue and Delordinaire worked on the Hollander.

It’s beneficial to have such diverse perspectives, and it can also be challenging. Pepper sat in design meetings to gain insight from the discussion and contribute solutions for constructability that retained the design intent.

For example, the masonry façade matched seven different brick types. Mockups for each was created for the architect to approve, followed by the city of Chicago, then the state of Illinois landmarks and finally the national park services – each taking three to five months. Some received immediate approval; others required four different iterations before they were considered an exact match. 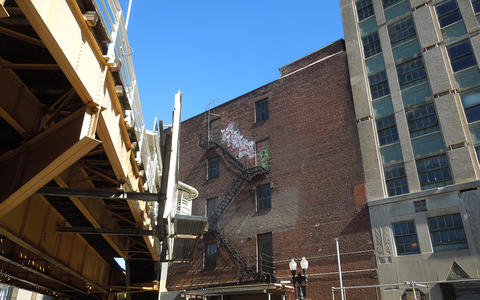 Located five feet from the building is the Chicago Transit Authority’s Blue Line elevated train, which is convenient for hotel guests but presented challenges for the renovation. The swing stage that was used for the façade restoration extends out from the building by up to seven feet, so trades working on the façade would be suspended directly above the L.

Since the train runs every five minutes, it would have to be shut down to complete the façade work adjacent to it. Pepper coordinated with the CTA and leveraged a previously scheduled shut down for track maintenance to complete the work.

Another concern was the noise from the train and the effect it would have on guests. To resolve the issue, the team installed a second window on floors three through five to add an additional sound barrier for guests. The team built a mock-up room in the existing building adjacent to the tracks and worked with an acoustical consultant to test the sound levels and design a window considerate of the extra noise.

Since the buildings were being re-purposed into a hotel, the team was challenged with balancing the historical integrity with functionality. The design required a high level of craftsmanship, so we laser scanned the inside to capture existing conditions and discovered an existing pan-deck structure in the process, which would prove beneficial later.

The owner believed seven-foot ceilings would be too low and contemplated not building out the space because it wouldn’t be useful. The project team realized the need and sought out a solution. Referencing the laser scans, we worked with the MEP contractors to re-located the mains and collection pipes to the pockets in the pan-deck, which raised the ceiling to eight feet.

Salvaging a work of art

The exterior storefront is a showpiece, made of cast iron with oversize glass, decorative mullions, and detailed designs. It was falling apart and had no longevity of life in it. Additionally, building codes had changed, and the original materials and design were not installed to withstand the elements or adjust for expansion.

Faced with a complete re-fabrication, Pepper brought our trade partner in to work with the engineering team. The team re-used some of the original spandrel panels and profiles and then cast new aluminum pieces to replicate the original design. The new storefront is now weather tight and properly designed for expansion.

Today, The Robey and The Hollander provide 89 hotel rooms, countless social and gathering spaces, a rooftop swimming pool and additional retail space. But what makes it so special is the extensive historical preservation that creates a vintage vibe and provides a unique vantage point of the Chicago skyline. At Pepper Construction, we could not be more proud of the results. As visitors and residents of Chicago enjoy the new venue, we think about the careful effort it took to bring it back to life. It’s our work of art. Our masterpiece. 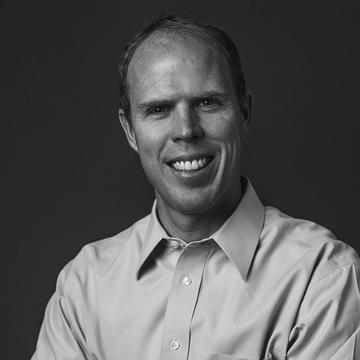 Brian serves as one of Pepper Construction's higher education leaders, having completed more than one million square feet of college and university projects throughout the Midwest. His clients range from some of the most recognizable institutions in the region, like the University of Notre Dame, Northwestern University and the University of Chicago, to smaller liberal arts and community colleges like Dominican University and North Central College. Brian's strength is in leading teams through the preconstruction planning process, and in 2014, he served on a panel at MAPPA, where they discussed the pros and cons of capital project trends. Brian holds a MBA from the Kellogg School of Management at Northwestern University and a Bachelor of Science in Civil Engineering from Marquette University. He has served as a member of the National Alumni Association Board of Directors for Marquette University, currently serves on the Marquette University Civil Engineering Academic Advisory Board, the Associated College of Illinois Board of Trustees and is a member of the Society for College and University Planning (SCUP).

The passion of a craftsperson

Raising the level of quality through education