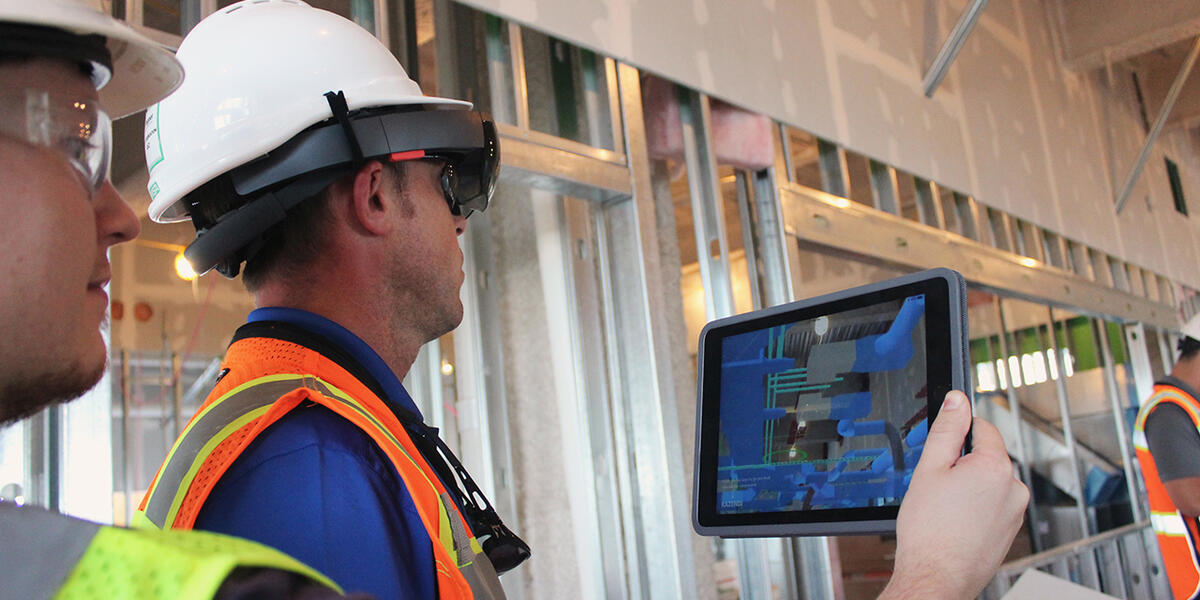 Project use cases for Augmented Reality

"I'm usually not this excited until after we've completed the project!"

What an awesome quote to hear from a client, and it came after his first experience with Augmented Reality.

At Pepper, we are 18 months into our utilization of this technology and over the course of the last year, we have learned a lot. While the first step was familiarizing ourselves with the hardware and software, we quickly realized that the bulk of learning would come through trial and error as we identified potential use cases on our projects.

At the beginning of testing each new use case, we were not sure what the outcome would be or if we would even succeed. In retrospect, this may have been our biggest reason for success over the past year. We haven't been afraid to push the technology to its limits, take some risks and try big things.

While our industry seems to have increased optimism about AR's potential to impact the future of construction, the most exciting thing we have discovered over the last year is the technology's ability to have an impact now. When you look at the construction industry, there's a great deal of potential for this technology to make a significant impact on the way we plan and execute work.

The purpose of this article is to share some of our experiences over the past year and look at what's ahead. But before we do that, let's lay the groundwork for some of the terminology.

The graphic below provides a quick visual summary of the differences. 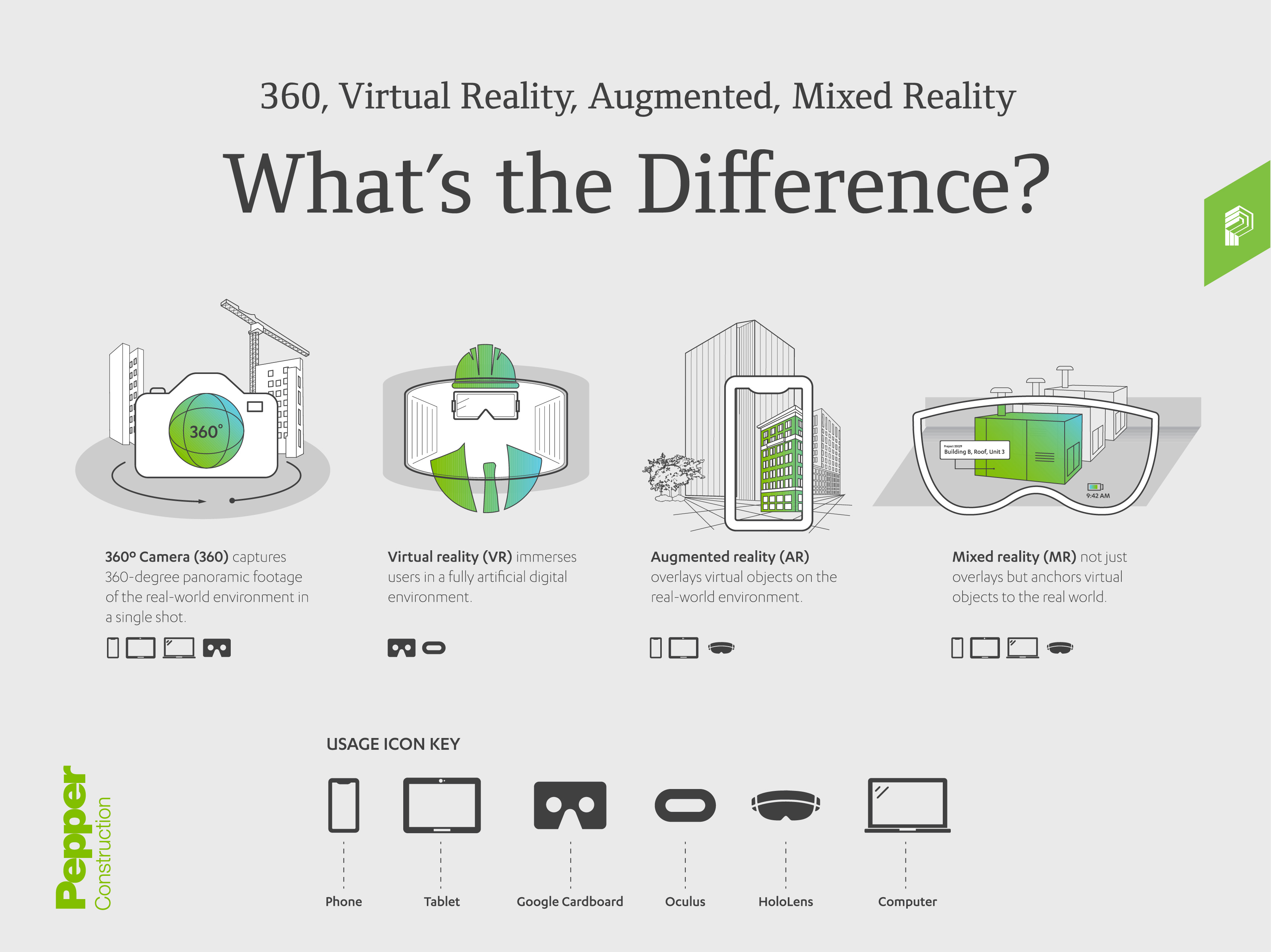 In short, virtual reality puts the user in a fully artificial (or digital) environment. With augmented reality, the user can see digital objects overlaid on top of the real world. Mixed reality allows you to interact with those digital objects in the context of the real world. With AR and MR, those digital environments can be scaled down in size and viewed on a table top or be complete one-to-one scale experiences.

To immerse our teams and our clients into augmented and mixed reality, we knew we wanted to use the Microsoft HoloLens.

What problems can be solved with augmented reality?

There was no handbook for how to use AR in construction (at least that we found). So we knew it was time to start listening and get creative, and we started with the question: "What problems can we help solve?"

After purchasing the HoloLens, we spent time "geeking out" and trying to educate ourselves on how the technology works. Once we wrapped our heads around the basics, we started listening to challenges our project teams and clients were facing and then asked ourselves if we could apply AR to help solve them. In some cases, we were even taking a problem that we would have solved with a different technology and exploring what would happen if we tried to solve it using AR instead.

Below are a few of the problems we came across and how we used AR to help solve them.

The Result - In a board meeting, one individual was asked about the status of the temporary walkway. She responded: "I know it's going to work because I've already walked t built it yet…through it." We hadn'

Spoiler alert: The quote at the beginning of this article was from the artist on this project.

As we move forward, we're challenging ourselves to find ways of sharing this new perspective. Since the technology is continuously evolving, here are our thoughts on what's coming up next with augmented reality and what it will take for its use to become more widespread in our industry:


Do you have a question about technology? Or are you interested in learning more about the application of augmented reality? Contact us. We would like to hear from you! 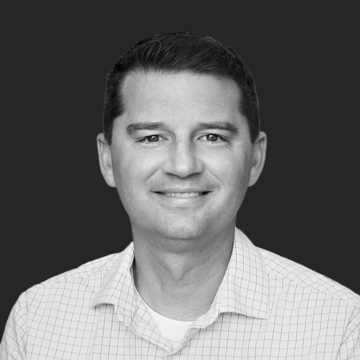 Mike Alder has utilized virtual construction technology on more than $1.7 billion in construction in a variety of markets, including healthcare, higher education, industrial, commercial and retail. He is a frequent speaker at industry events, including Autodesk University, the CFTA Conference and Lean Construction Institute. He was one of Purdue University’s first computer graphics technology graduates with a focus in Building Information Modeling. Mike was honored among four alumni with the Early Career Award from Purdue Polytechnic Institute, which recognized individuals’ efforts to harness the power of their degree to positively impact their chosen profession, as well as how today’s technology will improve the world tomorrow. Mike holds a Bachelor of Science degree from Purdue University Polytechnic Institute, formerly the College of Technology. 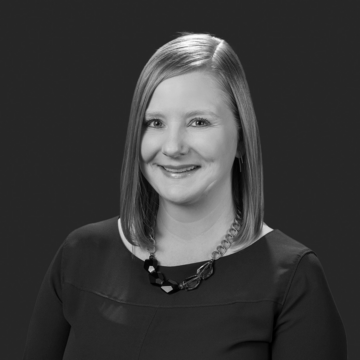 As senior vice president of virtual construction, Jen provides strategic direction for the company with regard to BIM, laser scanning, augmented reality, MEP and other technical services specialties. She serves as a key advisor to project teams on constructability and implementation strategies throughout the early stages of project design and development, as well as providing leadership on construction, fabrication and facility management and operations technology.

Jen has more than 12 years of experience in architecture, engineering and construction. She is a leader in the Chicago virtual construction community, speaking frequently and running workshops educating others on BIM. She has been recognized among 2016 Women in Construction by Constructech Magazine, Chicago Building Congress Future Leaders and ENR Midwest’s Top 20 Under 40. Jen holds a Bachelor of Science in Architectural Studies and a Master of Architecture, Structures, both from University of Illinois at Urbana-Champaign.

What if we could see underground utilities before we dig?