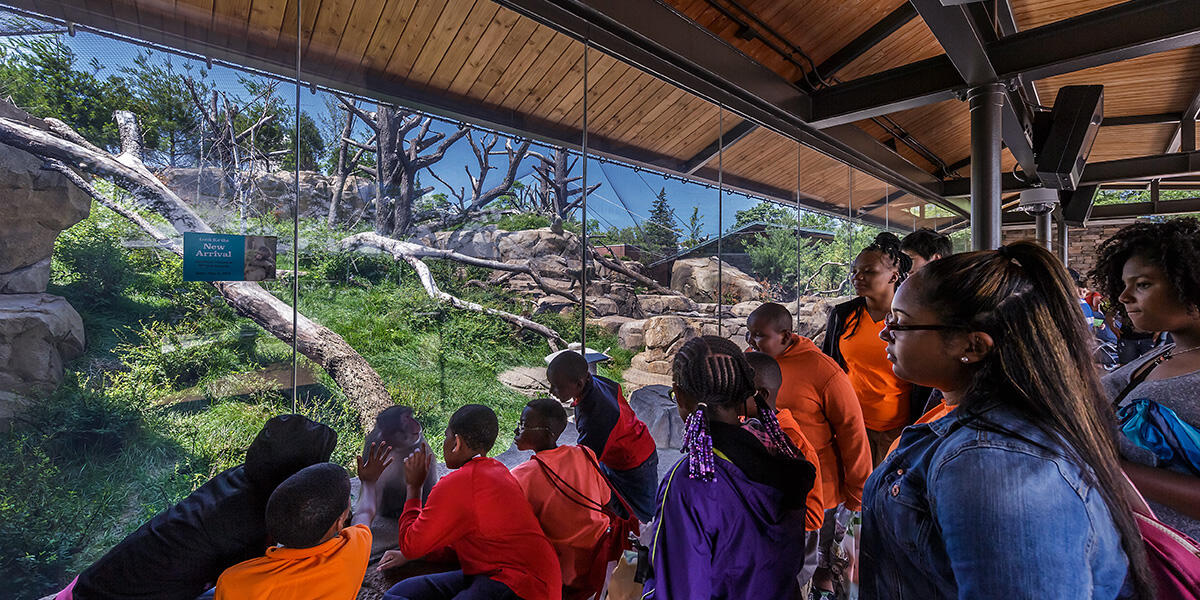 Lincoln Park Zoo's state-of-the-art home for snow monkeys, the Regenstein Macaque Forest, replicates the animals’ Japanese natural, forested, mountainside habitat. The 7,372-square-foot outdoor exhibit features an 850-gallon hot spring, a 1,250-gallon flowing stream, three large climbing trees and several other live and artificial trees. The draped, stainless-steel, woven-wire, mesh enclosure is secured to the surrounding structures and provides additional space for the animals as well as transparency for viewing. To enhance the visitor experience, two sheltered viewing areas with glass windows measuring 48 feet across give the illusion of being in the exhibit with the monkeys.

Equipped with webcams, the exhibit combines cutting edge behavioral and cognitive research with educational interpretive learning programs, providing visitors a unique opportunity to observe primatologists interacting with the monkeys. It also features a researcher’s tunnel, nicknamed the “hobbit hole,” where researchers conduct voluntary cognitive studies with the monkeys and observe the population as a whole.

In addition to the exhibit space, a 3,742-square-foot concrete holding facility to the west of the outdoor exhibit is buried under the exhibit landscape contours. An 800-square-foot event building is linked to the exhibit with public restrooms and a large glass wall in the multi-purpose meeting room to allow a separate close-up view of the Macaques. Green roofs are installed on compatible behind-the-scenes and event areas. These spaces also include recycled flooring in the meeting space and energy efficient LED lights throughout.

Adjacent to the exhibit, a new West Gate entrance to the zoo was designed and additional dining space provides tables and seating under a canopy of trees around Eadie Levy Café. In addition, the new Lionel Train Adventure includes a 28-passenger train that crosses over a country bridge, continuing onto a canyon and passing through a birch forest before returning to the red brick station.

The success of the design is evident in the reaction from its residents. When the eight Japanese macaques first filed into Regenstein Macaque Forest in Spring 2015, animal caregivers and researchers held their collective breath. It was chilly outside, and the snow-patched, rocky terrain of the spectacular new exhibit was perhaps less hospitable than the private space they’d inhabited since arriving from Japan. One after another the three males and five females entered and began exploring every inch of the multi-level exhibit from ground to treetops.

The real proof of their comfort level arrived May 3: a baby boy born to female Ono.

"It's so dynamic and beautifully designed.  The monkeys are so well habituated to it already, and it’s such an active social group. Having them here now—with all the cognitive science on display and new ways to interact with the public and education team—is really exciting," said Megan Ross, Vice President of Animal Care and Education.

Creating an enclosure that mimics the natural habitat

Working in a zoo comes with its own set of challenges, such as working in close proximity to patrons on a daily basis and remaining aware of vibrations, movements and loud noises that can stress animals in the area. One of the biggest challenges Pepper faced was installing the cable-and-mesh enclosure around the exhibit without the use of scaffolding and motorized lift equipment. The mesh drapes over cables installed from steel tabs at the top of one of the king-post trees, down to anchor points throughout the exhibit and surrounding buildings. The three king-posts are between 27 and 34 feet tall, feature more than fifty branches between them and are designed to mimic the macaque's native environment.

The tops of the trees feature a prefabricated cap with steel tabs extending past the GFRC skin of the tree. Because the steel tabs did not allow for adjustments in the field, the angles of the tabs had to be determined prior to fabrication. Once the layout was determined, we were able to coordinate the correct angles required to ensure field modifications were unnecessary. Through the steel tabs, 18 stainless-steel cables, some measuring more than 50 feet long, were installed, all with a clear line of site to avoid kinks. A ¾" stainless steel cable and lacing rods were used to tie down the mesh at the perimeter of the exhibit. The cut-to-size mesh was laced together by installers utilizing Bosun Chairs that would scale the cable above the center of the exhibit. The coordination of the mesh and cable installation spanned the duration of the project and involved nearly every trade on the project.

When building an artificial habitat for animals, every detail matters. Designing a naturalistic environment with leading-edge scientific research elements formed the crux of the project. Two research areas allow zoo staff to conduct cognitive experiments: one hidden under the vertical contours of the exhibit and another inside one of the public viewing shelters, offering visitors direct observation. Feeders in the form of traditional, stone, Japanese lanterns scattered throughout the landscape entice the macaques into view and elicit natural behaviors. Other welfare provisions such as water drinkers, heated rocks and cool air sources are integrated in the design, minimizing their visibility to visitors but easily accessible by the macaques.

“Those have been great because the food randomly appears and they haven’t figured out how it works yet," says Curator of Primates Maureen Leahy. "They have to check back multiple times to explore those foraging options.”

Equipped with webcams, the exhibit combines behavioral and cognitive research with educational interpretive learning programs. The "hobbit hole" underground researcher's tunnel allows researchers to conduct voluntary cognitive studies with the monkeys through mesh and screens. The other research booth is near the north shelter so the public can see how the macaques and researchers interact.

Holding areas inside the facility are generous in size, with high ceilings, furniture, shelves and rope for climbing to maintain comfort for the macaques when they need

The holding facility is divided into three zones – a clean zone with a keepers' entrance, offices and observation areas; a transitional zone for keepers to don protective clothing before having direct contact with the macaques and a third zone for hands-on research and medical care.

Working in an active, 150-year-old zoo

Pepper worked with Lincoln Park Zoo, architect Idea8 and subcontractors to develop a Job-Specific Quality Plan establishing quality goals at the start of the project and addressing every aspect to ensure the quality of the end result. The opening of each aspect of the project was phased with the Lionel Train Adventure opening first.

Established nearly 150 years ago, the zoo has numerous forgotten utilities, exhibits, roads and foundations hidden on the historic property. Many of these were undocumented or mislabeled on old surveys and drawings. Our team had to relocate existing utilities while sequencing construction around that work to stay productive and uphold the timeline. This involved moving a 12kv electrical line while keeping all connected buildings from losing power and constructing a new building on top of it. During this process, we coordinated all shutdowns with the owner and other zoo facilities, maintaining life support systems for other animal exhibits throughout the zoo and ensuring the daily routines of the animals, staff and more than two million annual visitors were not disturbed. Despite challenges with the dated infrastructure, services outside of the scheduled shut-downs were maintained to all buildings and exhibits.

Knowing that there was a maze of existing utilities on the project site, we located all utilities by hand digging and pot-holing with a vac-truck. Port holes at multiple locations identified the elevations of the utilities. Quality and safety plans were developed for every subcontractor which included plans for addressing the above utility concerns. Plans were reviewed and 2updated frequently to ensure the team could deliver the project without compromising the quality of the design.

Throughout the entire project, we never lost site of the fact that we were creating what was bound to be one of the zoo's most popular attractions. The ultimate experience that visitors would have and the macaques would "live" every day helped to drive each decision and motivated the members of our team to find creative solutions to whatever challenges they faced.

The passion of a craftsperson