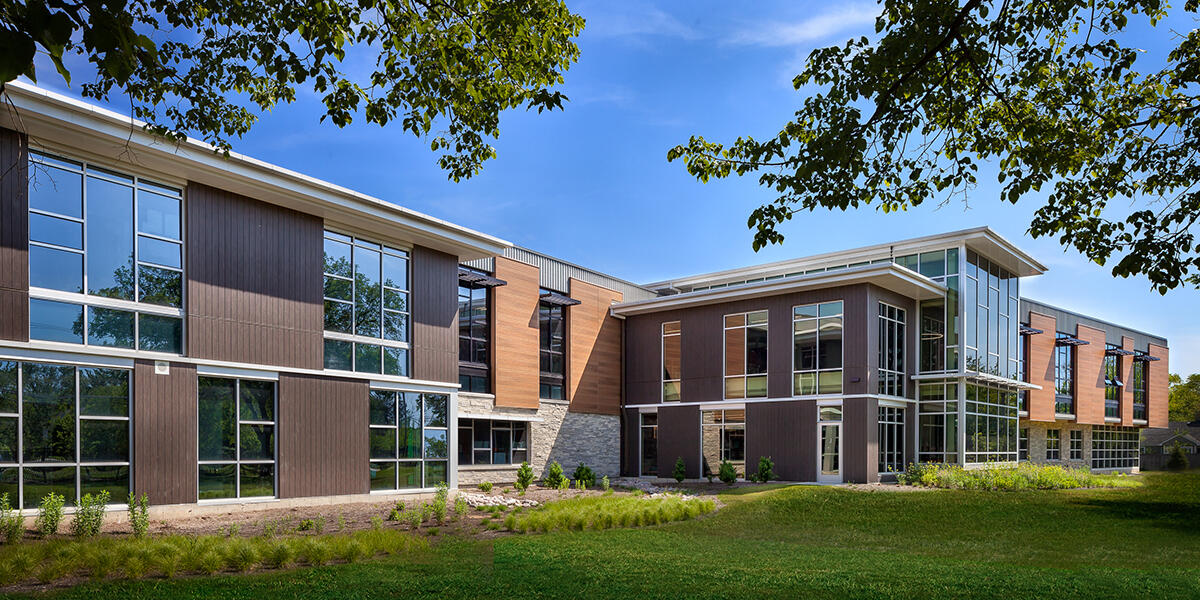 The science of building codes and climate zones

This summer, new national energy codes took effect in Chicago (June) and Illinois (July). Each state has their own requirements for following the national codes. Though the changes are not significant to our work, these changes, along with AIA's recent Resolution for Urgent and Sustained Climate Action, acknowledge the fact that our climate is in fact changing. Our building codes have to match the environment in order for the systems to perform properly.

What are IECC and ASHRAE and how do they work?

Regulations were established to help protect the environment and reduce energy consumption by reducing air pollution, controlling demand and stabilizing supplies and costs. Design and construction professionals in Illinois are required by law to follow the latest published edition of the International Energy Conservation Code (IECC) and American Society of Heating, Refrigeration and Airconditioning Engineers (ASHRAE) Standard.

IECC and ASHRAE provide two options for the new energy code: IECC 2018 or ASHRAE 90.1-2016. Only one is used for the entire building, so the building envelope cannot use 2018 IECC and the mechanical systems use ASHRAE 90.1-2016. Both must use the same code.

According to the US Department of Energy, the 2018 IECC code establishes a baseline for energy efficiency by setting performance standards for the building envelope (defined as the boundary that separates heated/cooled air from unconditioned, outside air), mechanical systems, lighting systems and service water heating systems in homes and commercial businesses.

According to  ASHRAE, the "society and its members focus on building systems, energy efficiency, indoor air quality and sustainability within the industry. Through research, standards writing, publishing and continuing education, ASHRAE shapes tomorrow’s built environment today."

Typically projects follow IECC, but on projects seeking a green building certification such as LEED, the client follows ASHRAE 90.

As builders, we rely on climate zones to know what energy codes and standards to follow. While the link between the two has been recognized for years, it wasn't until 2004 that a single climate zone map was developed for all building codes.

In the early 2000s, a single map of U.S. climate zones was created based on analysis of U.S. weather sites identified by the National Oceanic and Atmospheric Administration (NOAA), as well as classifications of world climates. This map divided the United States into eight climate zones, which were further divided into three moisture regimes designated A, B, and C, totaling 24 potential climate designations. The new zones were established along county boundaries so builders could determine which climate zone applied to a specific location.

In 2003, with direction from the Building America teams, in particular Building Science Corporation, researchers at the Department of Energy's (DOE) National Renewable Energy Laboratory further simplified the IECC map, dividing it into eight climate zones based on temperature, precipitation, and heating and cooling degree days. The eight zones are: hot-humid, hot-dry, mixed-dry, mixed-humid, marine, cold, very cold, and subarctic.

The new map was first adopted in the 2004 IECC Supplement and the ASHRAE 90.1-2004 edition, and it's what has been used until recent changes were made. 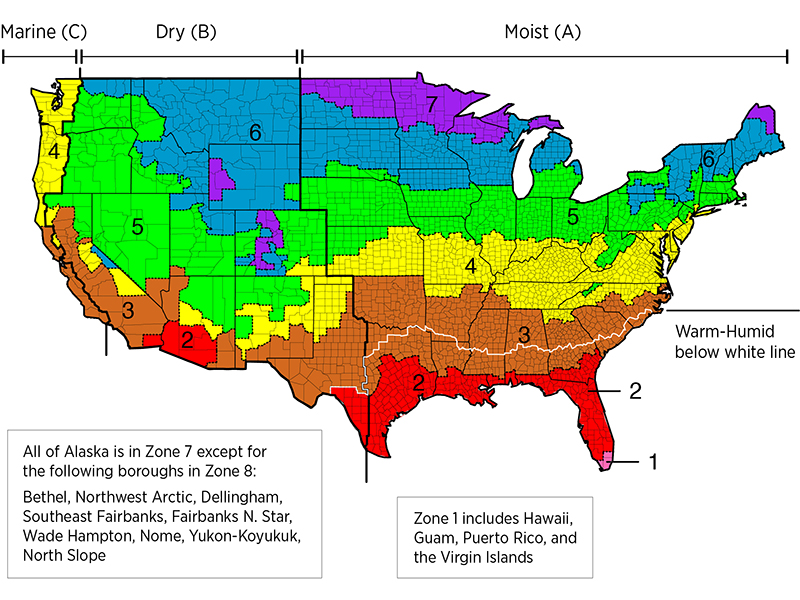 Each state has their own regulations with regard to how the climate zone map and building codes are followed. In Illinois, a major announcement was made in 2012, where we committed to update with the national codes every 3 years, with up to 6 months to implement.

What changed in 2018, and how will the changes affect my project?

The change from the 2015 IECC to the 2018 IECC upgrades several requirements for commercial buildings, including enhanced requirements for the Solar Heat Gain Coefficient (SHGC) of glass and automatic controls in heating, ventilation and air conditioning systems. Electrical codes changed the most to be occupant dependent, potentially impacting the R value. The southern half of Wisconsin changed to zone 5 in the ASHRAE 90.1-2016 standard. 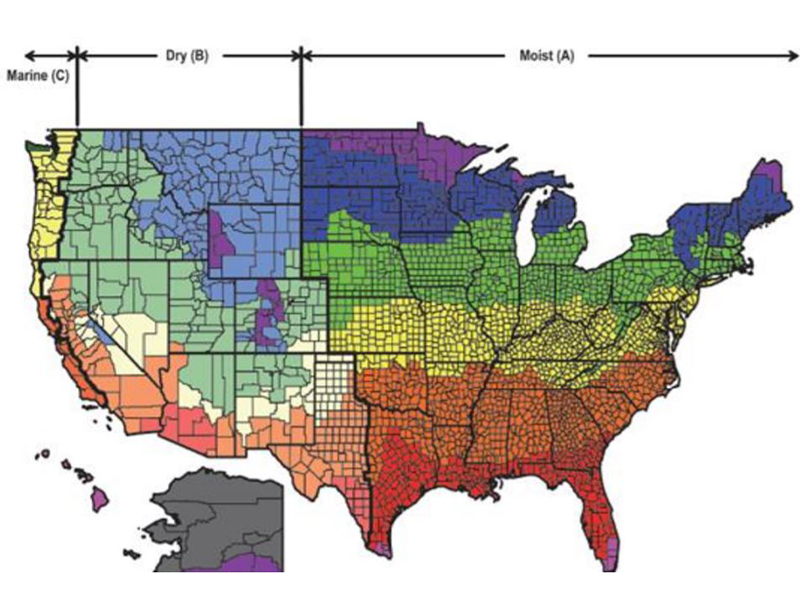 More significant than the ASHRAE code changes is the fact the climate zone map itself changed. The most significant changes don't affect us in the Midwest: Climate zone 0 was added for the islands. Otherwise, locally, frost lines in the south half of Wisconsin moved from 48 inches to 42 inches. We're still in zone 5 in Chicago, but now our Wisconsin office, which used to be in zone 6, is also in zone 5. The climate is getting warmer. Unlike Illinois and Chicago, however, Wisconsin does not have requirements for adopting the national codes.

When a building is designed, it is designed so all of the systems work together to operate efficiently, and it is designed specifically for the climate in which it is located. We've seen this demonstrated many times, where a client replaces one system with a more efficient one, only to develop an issue somewhere else. That is because the systems are no longer working together. As you think about your building, it's important to look at the performance of all the systems together.

Why should you care?

This change represents the first action the government has taken toward addressing climate change. Whether they wanted to or not - the building code requirements did it for them. Our climate impacts how our buildings perform today. More importantly, it falls in line with resiliency planning and the need to focus on quality in your buildings so they can withstand environmental impacts over the long-term. 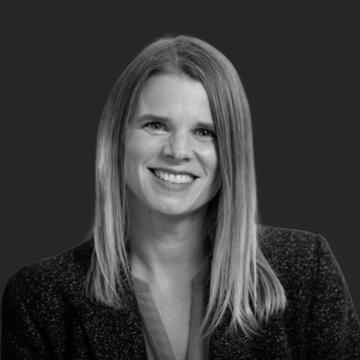 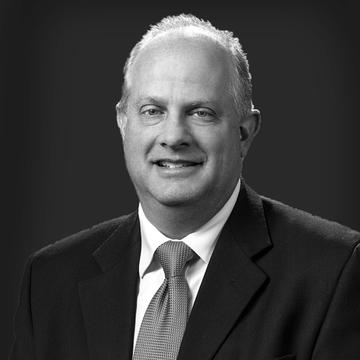 Corey Zussman is a 26-year veteran in the construction industry. Since 2012, he has helped guide the leadership, design and implementation of Pepper's quality management systems and continually assesses and improves the effectiveness of our processes and standards. As director of quality management, Corey visits Pepper jobsites to plan, oversee and promote construction quality directives. He serves as a resource to all project teams throughout the preconstruction and construction process.

Corey holds his Master of Business Administration with a specialization in Quality Management and his Bachelor of Architecture with a minor in Construction Management and Business Management from the Illinois Institute of Technology. His industry involvement includes being an active member of AIA and Construction Specifier Institute, RCI and ASQ – and he frequently lectures on quality issues. He is a licensed architect and has his NCARB certification. Corey is a Registered Exterior Wall Consultant, Registered Waterproofing Consultant, Registered Roof Observer and is a certified document technician.

Peeling back the layers of TPO roofing systems

Preventing moisture issues in your building