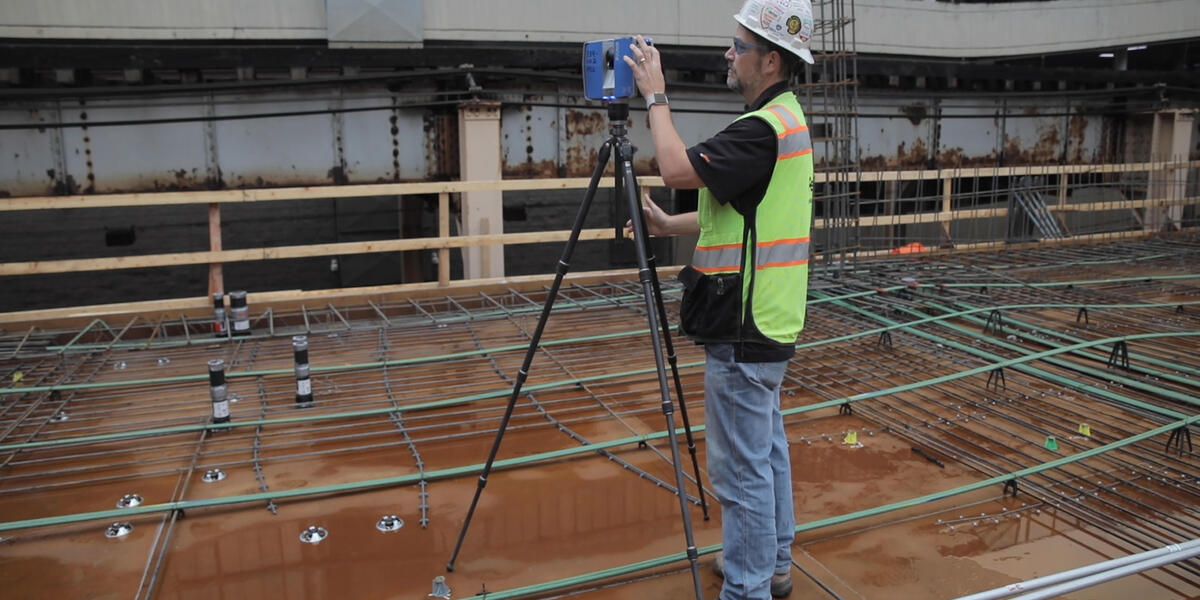 The tale of two measurements

Looking back on his 18 years in the field with Pepper, Tech Engineer Foreman Kevin Olsen honed his skills in earlier days working side by side with his father, Mark. It was a time when surveying meant taking hardcopy plan designs and completing rough grade and site layout staking. Together, father and son have handled documentation and layout data across more than 500 projects.

The evolution of field-scanning technology over the last decade makes this process seem primitive.

Today’s construction industry, notes Kevin, is characterized by shorter building cycles, tighter budgets and growing expectations for accurate data on demand. This situation brings challenges, as well as a chance to distinguish Pepper in an increasingly competitive market.

When it comes to laser-scanning technology, he says, “Pepper is leading the way.” Not surprising, given its culture that embraces innovation.

Case in point: “I started out flying drones for aerial photography.” While construction drone usage is getting off the ground, Kevin points out Pepper already has an in-house pilot dedicated to the task.

High-definition surveying using laser beams, virtual design construction (VDC), Building Information Modeling (BIM), and Reality Computing entered the picture about seven years ago. “All techs were given laptops, the chance to learn the new technology, access it and transition with education, including laser-scan classes,” says Kevin, who earn certified FARO training in the process.

“With 3D laser scanners, we’re truly capturing a moment in time.” The scanners collect survey data points at a rate of 50,000 points per second with an effective range of up to 400-500 feet. The laser recording measures every pipe, conduit, bolt – safely away from targets, and converts the conditions into a cloud of data points. “We can rush a point cloud in as little as 36 hours.”

Gone are the days Kevin and Mark sometimes bring up over dinner, when roads had to be surveyed while working in traffic, or open excavation from trenches surrounded by the dangers of heavy, fast-moving equipment.

Pepper tech engineers can now scan all components as they are installed, creating a time-lapse record with millimeter accuracy data on HVAC, floors, structural steel, pipes and rebar in concrete slabs. Combining point clouds with design models means they can expose differences between design and physical conditions, resolve issues before problems arise and modify components during fabrication to ensure accurate fit at installation.

Because as-built documentation can be collected from all major milestones in a project, clients get valuable archival records of what’s behind walls, above ceilings and under floor slabs. In short, the process provides greater accuracy faster, safer and with the capacity to reduce rework that translates into critical time and cost savings.

Even before 3D tech, Kevin recalls how their work transformed with the switch from optical-mechanical methods to fully-electronic robotic-guided total stations. “We moved from communicating with radios and hand signals to robots that could be operated by a two-person crew and cut a 45-minute process into a 5-minute task.”

“My dad saw the potential in computer-aided design (CAD) technology in his time, and he handed me the tech.” …and the baton. Mark retired six years ago, but his interest in the field didn’t. “We’ll have dinner and he often asks what we’re tinkering with now.”

“Looking through the lenses, there’s neat stuff: laser-tracking glasses and virtual 3D where models loaded into headsets create visual inspections of a deck.” Kevin is careful to add that as robust as the technology is, “the process is not as easy as it looks.”

“We can traverse through space, but we need to know what to capture, to have the forethought, know the back end and be able to analyze the information.” In our digital age, there is still space for old-style craftsmanship. This is the Pepper advantage: the capacity to understand and effectively apply the spatial data. The user makes the difference.

BIM for Facility Management (FM): How to get started