Amtrak wanted the room to function properly for today's needs, while also maintaining its historic integrity. They saw the opportunity to go beyond renovating the space to restoring it to its original intent and retained Goettsch Partners to advise them on the design. As such, the project required careful review and negotiation to ensure the correct elements were incorporated into the space.

But it was more than a facelift. All the infrastructure had to be set up, which meant going down two floors to pick up air and exhausting it three floors up.

"It was important to have Pepper on board very early on during preconstruction to establish the budget and schedule based on the entire scope," shares Len.

Since the finishes were so damaged, designers worked from original photos and publications to develop the design and also referenced them during the restoration. The entire process was fast-paced, yet methodical - and almost surgical at times.

Union Station had a very clear end point - November 2016. As such, the schedule itself was dictated by lead times and took eight months from start to finish. Immediate attention turned to the historical features to properly identify them and get mockups approved: paint, murals, plaster and lighting.

Aside from the long-lead items, Pepper's first task was to install air handlers since there was nothing serving the current space. We scanned the structure and determined very little additional support was needed. Another positive finding: unlike most historic renovations, we were fortunate to find plenty of space above the ceiling to run full-size ductwork and electrical for lighting that didn't conflict with elements of the ceiling. 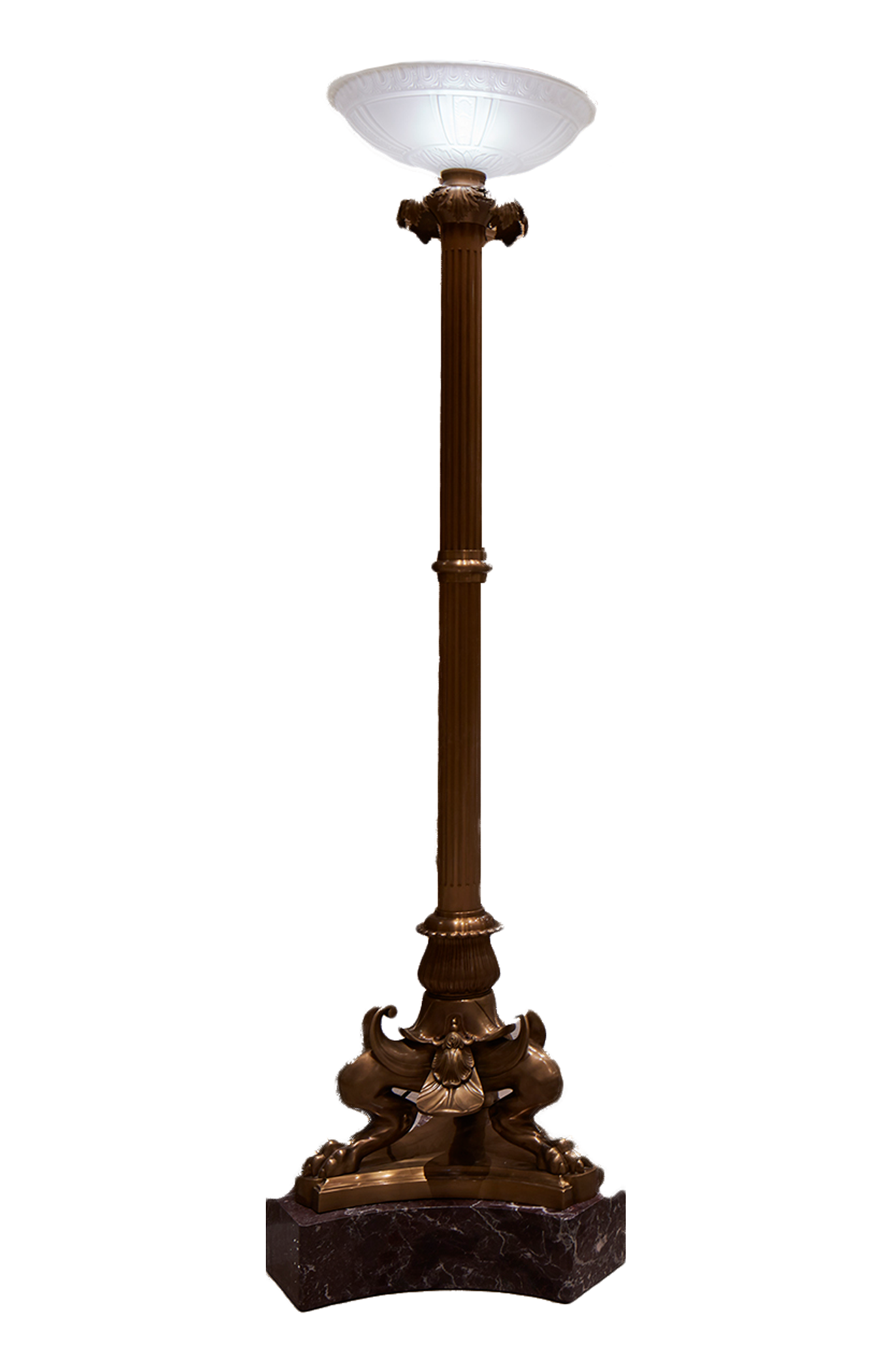 Though the lamp posts in the room are considered a furnishing, since they are not an original feature, they still required approval by the historical society.

A laser scan was taken to capture existing above-ceiling conditions.

Painstaking process to bring back the color

Understanding the color was critical to the room's historic significance, the first partner hired by Union Station was actually the paint specialist, EverGreene.

"The biggest surprise for me was the color. When I first saw the paint color mockups, I thought it couldn't be right. If we painted the entire room those colors, it was going to be too loud. I was worried for the finished product. But after I saw it in scale, it's one of my favorite rooms I've ever worked on." explains Ben.

EverGreene was under pressure very quickly to identify the original paint and then get samples together for refinishing. Like crime scene investigators, their conservators scraped the paint down, literally separating every single layer, to find the original colors. It was a concentrated analytical process that involved hundreds, if not thousands, of different colors and took months to complete. After scraping off the paint, the curators analyzed the chips with a high-powered magnifying glass. Once the original paint color was identified, they used laser scanning technology to define the right mix to match the original paint.

As is often the case to provide durability, rooms are painted and then covered with a varnish, which has a significant effect on the final color. Using a combination of technology and true craftsmanship, the artists found the right combination of exact color and varnish to replicate the original finish.

Another significant historical feature was a set of four ink murals that hung as wallpaper on the upper part of the walls. Each mural was composed of seven different types of wallpaper strips, and depending how they were configured, they would make a different image.

For three of the murals, many of the original strips were disintegrated. To restore them, the existing strips were scanned and converted into designs that were replicated on new canvas. The new strips were then hand-painted and incorporated into the original work. The fourth had to be completely replicated. 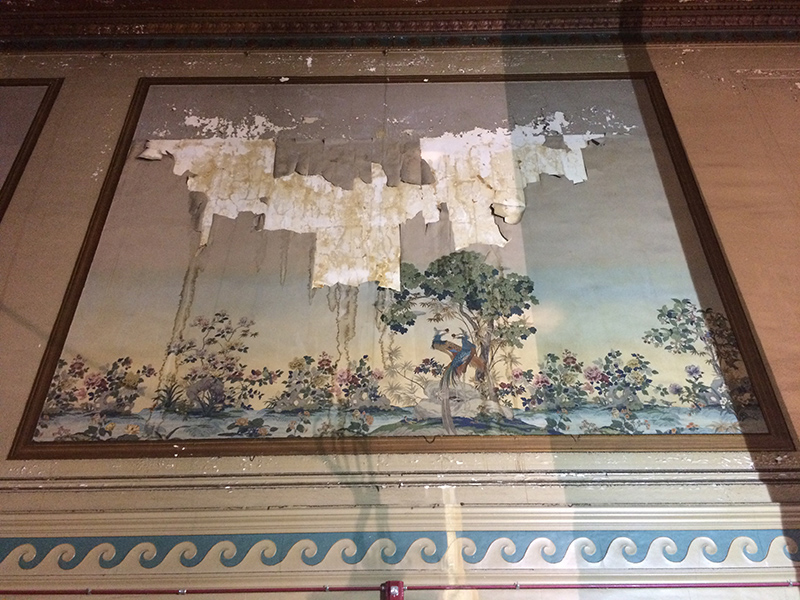 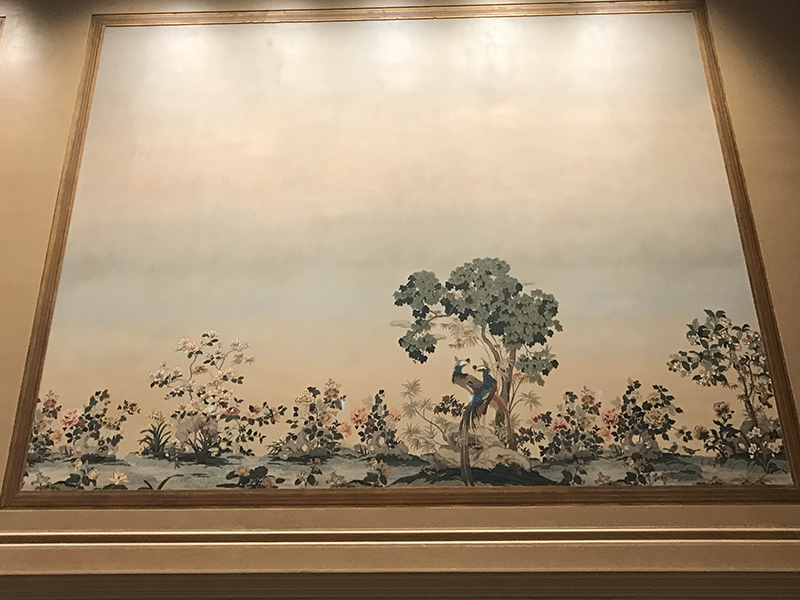 Up to 15 percent of the ceiling plaster was lost, including special features like rosettes. As EverGreene was examining the paint, we got to work on the ceiling. We removed existing plaster pieces to cast new molds, and then the shape was submitted for approval before repairs were made. 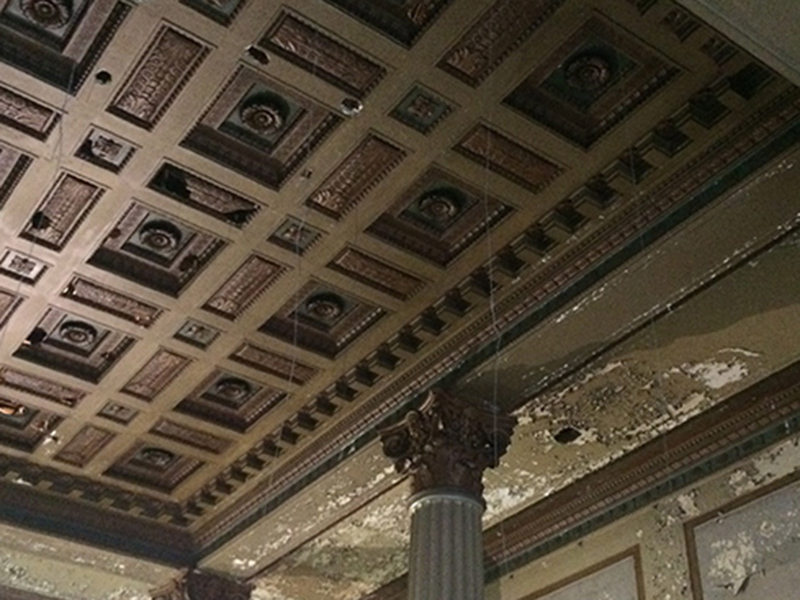 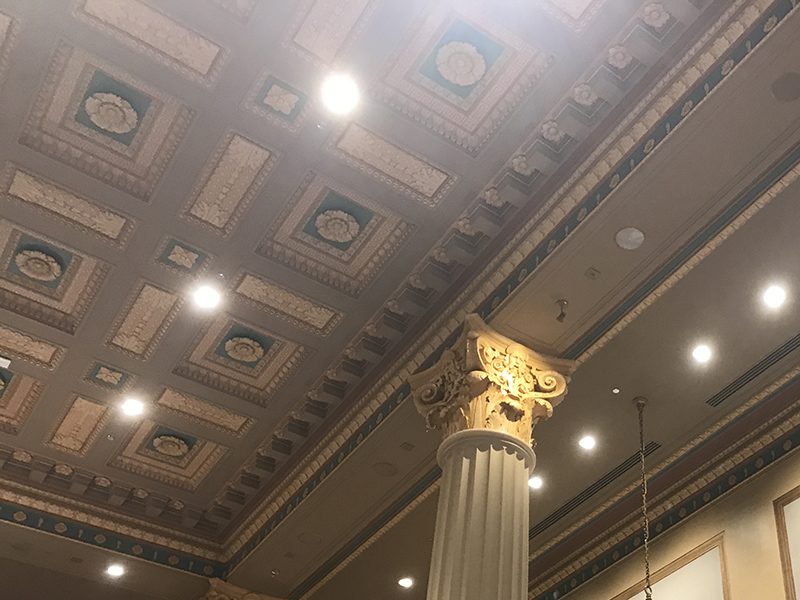 Before the restoration, the room was used for offices and storage. The original chandeliers were removed and placed in storage - until they were discovered again, hidden away in wooden crates in the basement.

In all, nine bronze chandeliers hang on 15-foot bronze chains. Despite holding onto them, none of them was complete - missing finials, decorative caps and other bronze pieces. Seven were restored and two had to be completely replicated. A local Chicago restorer was able to clean and polish them down to the original finish. Like the paint, the exact age and brass finish had to be determined so they could replicate and cast new bronze to match. Finally, the chandeliers were retrofitted with new LED lamps. It took 18 weeks to restore and replicate the ceiling fixtures, so initiating the process and releasing them quickly was vital to the schedule. 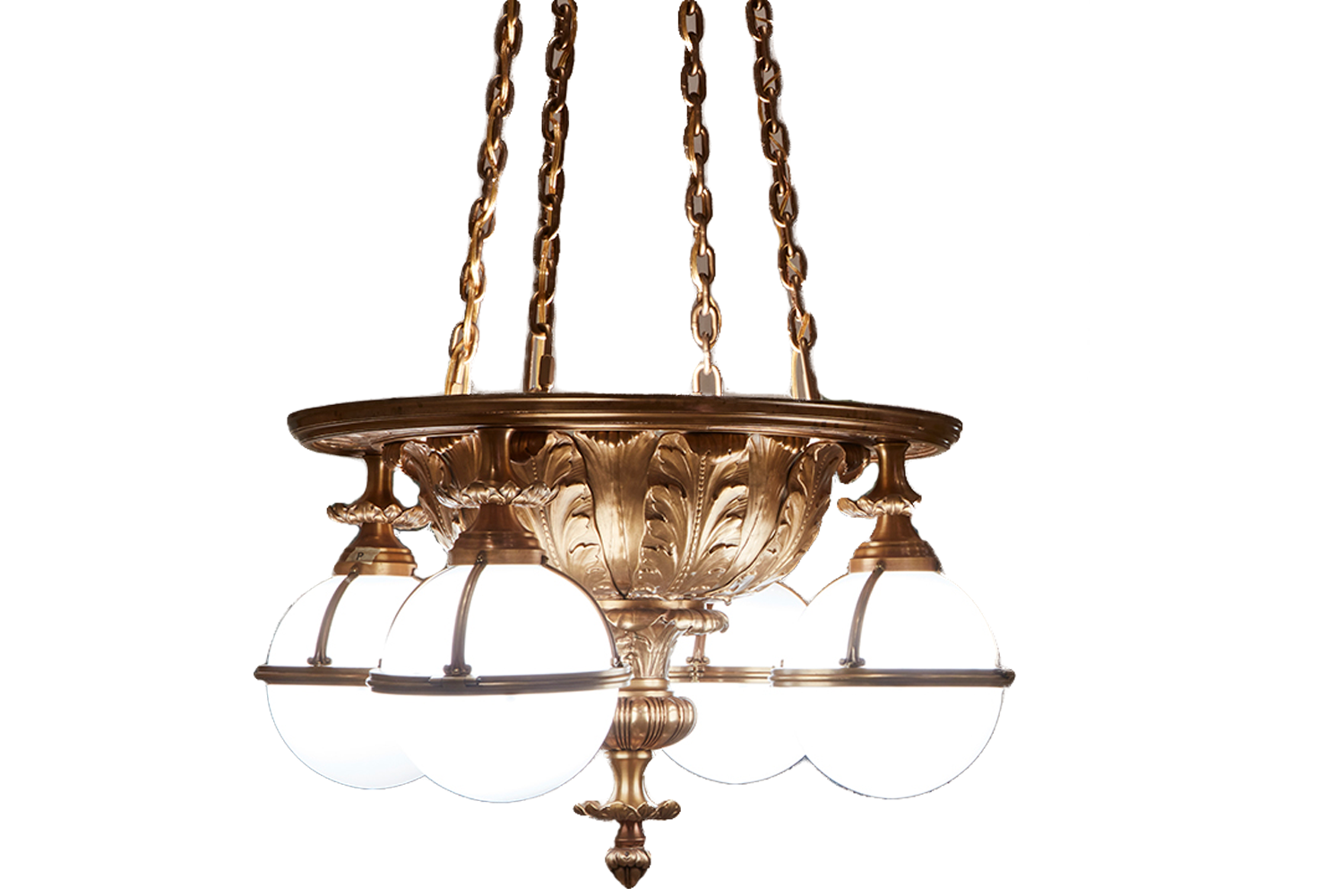 Nine bronze chandeliers hang on 15-foot bronze chains. The original fixtures were discovered stashed away in the basement.

In addition to the paint, plaster and lighting elements, the room boasts intense decorative metal grilles and gates that also had to be recast. For that, we turned to MTH metal fabricators, located in Villa Park, Illinois. In fact, they fabricated one of the last features to be touched within the space: an ornamental cast iron bronze mirror. They built a mock-up and slipped the order into production within two weeks – in time for the grand opening.

It was also one of the most satisfying transformations for Len. "Every restoration to preservation job finds surprises. To imagine what the mirror looked like and get it done in short order – it's one of the many jewel elements within the room that makes it special."

A masterpiece enjoyed by all

The project started with a clear vision. After months of clean-up and hand-craftsmanship, today, the space looks nothing like it did when it was shuttered. Now, the distinct and inviting colors serve as a warm backdrop for banquets and events, and it's one of the largest non-hotel options in the city.

All of the elements – color, texture and lighting – work together in harmony to create a unique ambiance. They were crafted by a skilled collection of tradespeople who diligently worked through challenges to deliver a complete transformation on schedule. 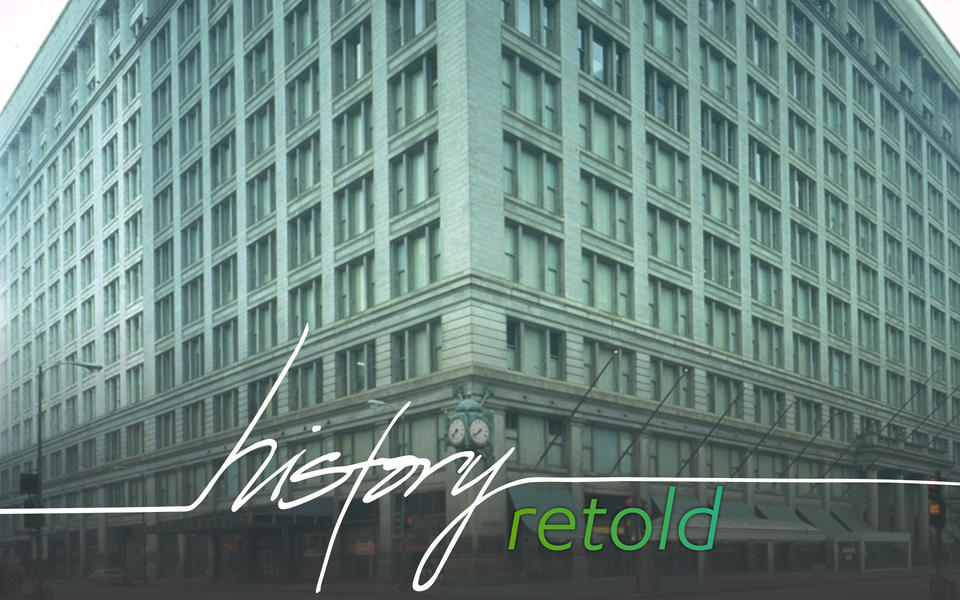 Maintaining landmark integrity during a renovation